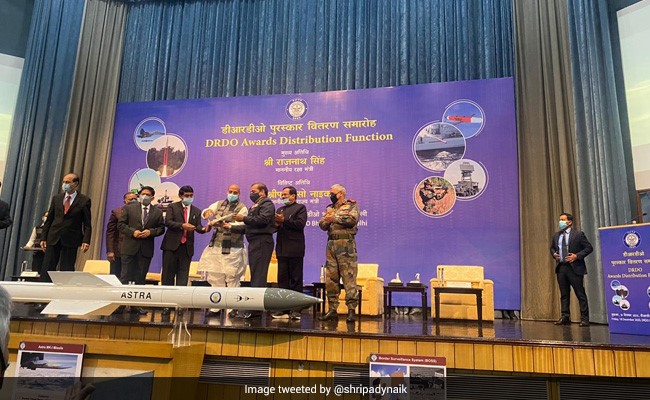 All three systems--IMSAS, Astra Mk-1 and BOSS-- have been designed and developed by DRDO

Defence Minister Rajnath Singh handed over three systems developed by the Defence Research and Development Organisation to chiefs of the three armed forces on Friday, said an official statement.

The IMSAS is a software system that provides global maritime situational picture, marine planning tools and analytical capabilities to the Indian Navy, the statement noted.

This missile is the first indigenously developed beyond visual range (BVR) missile that can be launched from Sukhoi-30 and other fighter aircraft.

Mr Singh handed over the Border Surveillance System (BOSS), which is an all-weather electronic surveillance system, to Army Chief General MM Naravane at the event in New Delhi.

All three systems--IMSAS, Astra Mk-1 and BOSS-- have been designed and developed by the Defence Research and Development Organisation (DRDO) only, the statement said.

Minister of State for Defence Shripad Naik and Chief of Defence Staff Bipin Rawat were also present at the event.