Prashant Kanojia was picked up by the police from his home in Delhi's West Vinod Nagar on Saturday afternoon and taken to Lucknow where he was formally arrested. The head of television news channel Nation Live and its editor were arrested in Noida the same evening.

Prashant Kanojia, a freelance journalist, was picked up from his home in Delhi.

A freelance journalist, an editor of a TV channel and its owner have been arrested over contents that were considered an objectionable post on Uttar Pradesh Chief Minister Yogi Adityanath. The arrests have sparked a huge debate on social media on freedom of expression and the top editor's body in the country calling it an "effort to intimidate" the media.

Prashant Kanojia, a freelance journalist, was arrested by Uttar Pradesh police in Delhi on Saturday for a tweet that had "objectionable comments" on Yogi Adityanath. The same evening, the head of private television news channel Nation Live and its editor too were arrested in Noida for airing allegedly defamatory content on the Chief Minister, the police said.

Mr Kanojia, was picked up from his home in Delhi's West Vinod Nagar after a complaint by a police officer in Lucknow, alleging he tried to "malign" the Chief Minister's image. He had shared a video on Twitter and Facebook where a woman is seen speaking to reporters of various media organisations outside Yogi Adityanath's office, claiming that she had sent him a marriage proposal.

He has been arrested under Section 66 of the Information Act and has been charged of criminal defamation and making statements causing "public mischief".

The verified Twitter handle of Mr Kanojia said that he is an alumnus of Indian Institute of Mass Communication and Mumbai University and has been associated with several media organisations. The police took him to Lucknow where he was formally arrested on Saturday evening.

In a separate case, Ishika Singh, who heads private news channel Nation Live, and Anuj Shukla, its editor, were arrested in Noida on Saturday evening.

During a debate on the channel on June 6, the woman, whose video was shared by Prashant Kanojia, had allegedly made defamatory statements against Adityanath, the police said. They were arrested after workers affiliated to a political party approached the police with a complaint against the news channel for broadcasting the claims of the woman without verifying facts, a senior official said.

"This could have led to a possible law and order situation," police officer Vaibhav Krishna said. 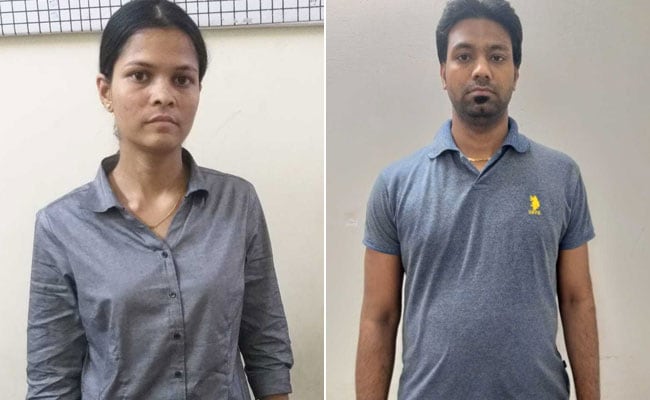 Ishika Singh (left), who heads a private TV channel, and its editor, Anuj Shukla (right), were arrested from Noida on Saturday.

The Editor's Guild of India condemned the action against the media-persons and called it "an effort to intimidate the press, and stifle freedom of expression". Many people on Twitter condemned the journalist's arrest.

A hashtag, #FreePrashantNow, was the top trend on Twitter on Sunday, with people calling the journalist's arrest illegal and violation of civil liberties.

"...arrest is abuse of law," tweeted Siddharth Varadarajan, Founding Editor of The Wire where Mr Kanojia has worked in the past.

Now consider danger of @uppolice using IPC 500 (criminal defamation). If the 'crime' is to be pursued by cops without @myogiadityanath filing complaint like an ordinary citizen, & you can be whisked away, then it's farewell to free speech in UP & India #ReleasePrashantKanojia 3/3

500 IPC is non-cognisable, police investigation requires cognisance of offence by a magistrate. pic.twitter.com/NKhAlqrkPa

During investigation, it was also found that the Noida-based channel did not have any licence to operate, the police said. An additional complaint over the alleged illegal operation of the channel was made by a district official in Noida. "They have been arrested on both counts for the defamatory content as well as illegal operation of the channel," the police officer told news agency PTI.

The channel's version was not immediately available.