3 Die As Car Skids, Falls Into Stream Swollen With Rainwater In Kerala

The accident occurred when the car the victims were travelling in skidded off the wet road while trying to overtake a bus, said police. 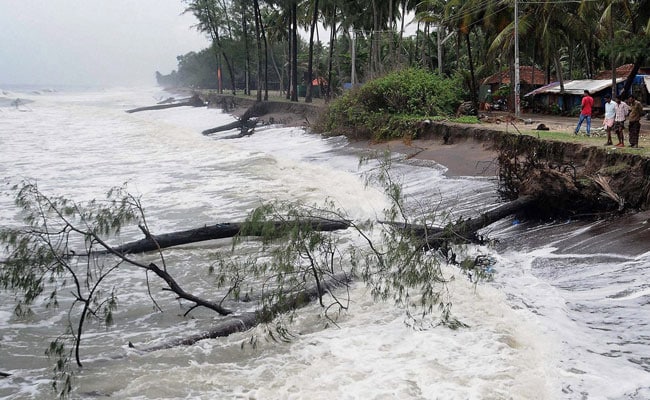 The car fell into a stream whose water levels had risen due to heavy rain, police said (Representational)

As heavy rains continued to lash Kerala, three members of a family died after the car they were travelling in skidded off the road and fell into a nearby stream swollen with rainwater while trying to overtake a bus near Vennikulam in Pathanamthitta district of the state.

Chandi Mathew, his wife and daughter drowned in the stream by the time locals could rescue them, police said.

The accident occurred at around 7 AM, when the car they were travelling in skidded off the wet road while trying to overtake a bus and fell into the nearby stream whose water levels had risen considerably due to the heavy rains, police said.

In another rain-related incident, a 60-year old man was swept away in the Pampa river in Athikkayam village in Pathanamthitta district and firefighters are presently searching for him, district officials said.

In view of the bad weather conditions and warning of heavy rains in the coming days, quarrying and mining activities have been put on hold in Kottayam and Ernakulam districts, officials said.

In Kottayam, 25 Malayalis who were visiting the Illikkal Ilaveezhapoonchira tourist centre in the district could not return home due to the rains and were presently safely housed in a nearby government school and adjoining homes, officials said.

Officials said they are making efforts to make way for small vehicles to pass on the Chakkikav-Koovapally road and added that rescue efforts in the area were being hampered by broken electric lines and poles.

Meanwhile, Kerala Pradesh Congress Committee (KPCC) chief and MP K Sudhakaran asked all party workers to come forward to aid in relief work in view of the heavy rains in the state.

Mr Sudhakaran has also asked the party to open control rooms in DCC offices and at the ground level and said that workers of all party units should come forward in this time of crisis and be part of the relief and rescue activities.

State Revenue Minister K Rajan said that besides the heavy rains, the strong winds accompanying it are also a matter of concern.

Speaking to reporters at Thrissur, the minister said strong winds are expected to hit the state, especially the coastal areas of Kollam, Kayamkulam and parts of Kochi, in the coming days and as a result even Vizhinjam port is expected to be affected.

He has advised fishermen to be careful in the prevailing situation.

Monday was declared a holiday for educational institutions in some parts of the state.

In Ernakulam, in view of an Orange alert issued for the district till August 4, all departments have been directed to be prepared and fishermen have been instructed not to go to sea, the control room of the district said.

Water levels of rivers flowing through the district are being monitored in view of the heavy rain warnings and a meeting of the District Disaster Management Authority is also scheduled to be held during the day, the control room said.

The central Meteorological Department had on Sunday predicted heavy rains in Kerala till August 4 with orange alerts being issued in various districts in the week ahead.

In view of the Orange alerts issued by the India Meteorological Department (IMD) for the coming week, Chief Minister Pinarayi Vijayan on Sunday said those in hilly areas should be cautious and as a precautionary measure they should be shifted to relief camps as soon as rains start.

Orange alert has been issued in Thiruvananthapuram, Kollam, Pathanamthitta, Alappuzha, Kottayam, Ernakulam and Idukki districts of the state for August 1.

Orange alert has been issued in eight districts for August 2, 12 for August 3 and 12 on August 4, according to an IMD district rainfall forecast issued for Kerala at 1 PM on Sunday.

There has been no change in the alerts in the information available on IMD site at 10 AM on Monday.

A red alert indicates heavy to extremely heavy rains of over 20 cm in 24 hours, while orange alert means very heavy rains from 6 cm to 20 cm of rain. A yellow alert means heavy rainfall between 6 to 11 cm. PTI HMP SS SS