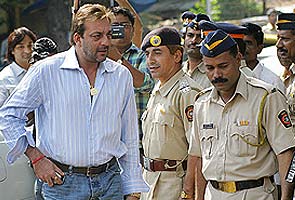 New Delhi: Press Council of India chief Justice Markandey Katju has appealed to Maharashtra Governor K Sankarnarayanan to pardon actor Sanjay Dutt, who was sentenced on Thursday by the Supreme Court to five years in jail in an arms case related to the 1993 Bombay blasts.

Mr Katju sought pardon for Mr Dutt under Article 161 of the Constitution, saying the actor had not been found guilty of playing a role in the 1993 blasts and had suffered a lot. (Read: Justice Katju's letter to Maharashtra Governor)

He said the Supreme Court found that Sanjay Dutt had in his possession a prohibited weapon without a licence and awarded him the minimum imprisonment prescribed under law.

Mr Katju said the power of pardon under Article 161 of the Constitution is different from judicial power as the Governor or the President can grant pardon or reduce the sentence of the court even if a minimum punishment is prescribed.

"There is no doubt that the Governor can grant pardon or reduce the sentence. In the case of Commander Nanavati, who was held guilty of murder, the Governor gave him pardon although the minimum sentence for murder is life term," he said in a statement.

"Surely, this is a lesser offence than murder. When the Governor of Maharashtra granted pardon to Nanavati, surely he can grant pardon to Sanjay Dutt," Justice Katju said.

He said that although Mr Dutt had committed an offence, there are extenuating circumstances, such as that the event happened 20 years ago.

"During this period, Sanjay suffered a lot and had a cloud hovering over his head throughout. He had to undergo various tribulations and indignities during this period. He had to go to court often, he had to take the permission of the court for foreign shootings, he could not get bank loans, etc," Justice Katju said.

The PCI chairperson said Mr Dutt had already spent 18 months in jail, had married and has two children.

"He has not been held to be a terrorist and had no hand in the bomb blasts. His parents Sunil Dutt and Nargis worked for the good of society and the nation. Sunil Dutt and Nargis often went to border areas to give moral support to our brave jawans and did other social work for the society," Justice Katju said.

Promoted
Listen to the latest songs, only on JioSaavn.com
He added that Mr Dutt, in the period of 20 years since the blasts, has through his films revived the memory of Mahatma Gandhi and his message, an apparent reference to 'Gandhigiri' in the film Lage Raho Munna Bhai.

"In these circumstances, I respectfully appeal to your Excellency to pardon Sanjay Dutt and set him free," Justice Katju said in his letter, referring to the speech of Portia in Shakespeare's Merchant of Venice that justice should be tempered with mercy.