Of the terrorists killed, eight were from Pakistan and 10 were locals, including two each of Lashkar-e-Taiba and Hizbul Mujahideen 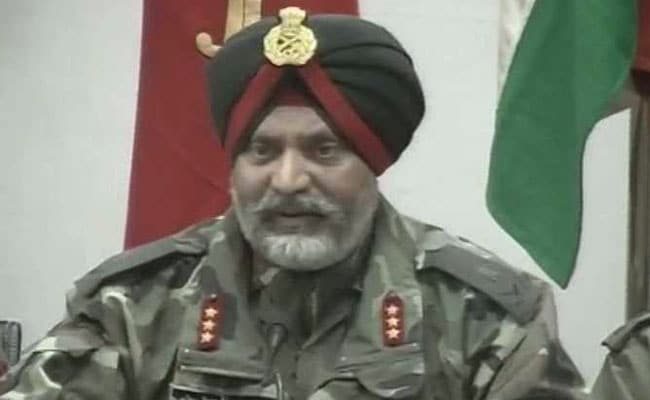 Of the 18 terrorists killed, 14 belonged to JeM including its "six main commanders": Army

"We have gone very forcefully after the JeM, and we have reasonably succeeded in our aim of eliminating them at the earliest so that they are not able to carry out a Pulwama-like attack," he said.

"We have also eliminated JeM's second-in-command Mudasir Khan, the main conspirator in the attack on a CRPF convoy on February 14. He was active for more than a year," he said.

Of the terrorists killed, eight were from Pakistan and 10 were locals, including two each of Lashkar-e-Taiba and Hizbul Mujahideen, he said.

"Our emphasis after the February 14 attack has been on elimination of the JeM leadership and we have been very successful in doing that in about three weeks since the attack... The leadership of the JeM has been hit very badly," he said.

However, the Army officer said, it does not mean the forces have stopped "looking at the LeT or HM. They are very much on our radar".

Lt Gen Dhillon said operations against foreign terrorists and the JeM leadership will continue "till we eliminate all of them".

Asked if there were more suicide bombers active in the valley, Lt Gen Dhillon said: "We are aware and keeping a track of all such modus operandi. We are prepared for it and are taking corrective measures."

Referring to the encounter in Pinglish area of Tral, the Inspector General CRPF said it was "doubly" significant for the paramilitary force as Mudasir was involved in the 2017 Lethpora camp attack as well.

"It was a clean operation, but our job is not done yet. Very important players in the dramatis personae still remain - the people who motivated and radicalised Mudasir, those who gave him explosives and other means to carry out these attacks. We are working in close coordination with the NIA," he said.

"Initial inputs about Mudasir started surfacing a year ago and subsequently, he joined JeM. The operations over the last fortnight have caused a lot of damage to the outfit," he said.

Mr Pani said the terror recruitment in the last three months has also come down significantly. Also, participation in funeral processions of terrorism has reduced.

"Of course, there are miscreants who try to do these things, but police are keeping a watch," Mr Pani said.

Asked if Mudasir made the IED used in the Pulwama attack, Lt Gen Dhillon said as the main conspirator, he helped and coordinated the attack, "but it is a matter of investigation whether he himself made the IED".

About ceasefire violations along the Line of Control, the army officer said Pakistan has been targeting civilian as it cannot hit military.

"Ceasefire violations have been going on in the Uri sector. However, no such incident has taken place in the recent past in other areas of the valley. Kamalkote in Uri has come under tremendous fire from the Pakistani side. Five civilians were injured yesterday. Pakistan has not been able to hit the army (targets), so it is hitting civilians. But, the Indian Army has given a befitting reply and we have hit their military targets," he said.

The Lt. Gen. said there are intelligence reports that terrorists were waiting in the launch pads across the Line of Control to infiltrate "whenever they get a chance".