Anshu was part of an NDTV report about how those who live in the open are having a harder time dealing with the pollution in the capital. 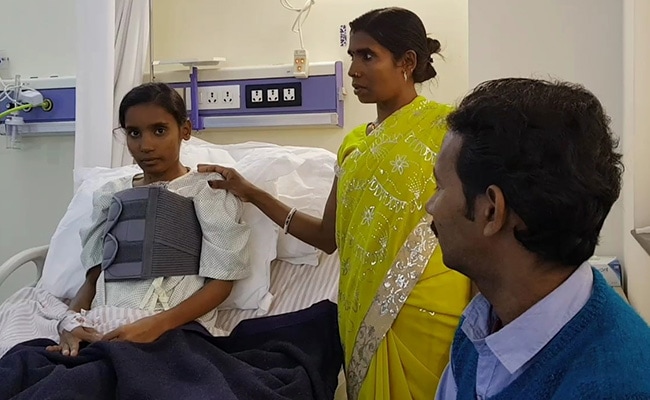 Anshu, who currently studies in Class 11, wants to become a doctor.

Thousands across India fail to get the right medical care due to the lack of resources but sometimes a helping hand can turn around someone's life. Last month, NDTV reported the story of 17-year-old Anshu Mahto from Lakhisarai in Bihar who had been living on the street outside Delhi's AIIMS hospital with her parents for the last four months, waiting to get treated for a life-threatening hole in her heart. But her father, a construction worker, was struggling to gather the Rs 60,000 that AIIMS had asked for.

Anshu was part of an NDTV report about how those who live in the open are having a harder time dealing with the pollution in the capital. She had spoken about how she is already a cardiac patient and the smog makes her breathing issues worse.

A month later, she is a now doing much better, having received treatment for her heart condition.

A day after the story was aired, NDTV was approached by Narayana Hospital in Gurgaon who offered to help the family. The hospital provided accommodation to the family for a month while tests were conducted and Anshu underwent a 10-hour-long complex surgery last week. All this was done without charging a single penny.

Dr Rachit Saxena, cardiac surgeon at Narayana Hospital, who led the team of doctors that operated Anshu said, "The surgery took 10 hours and it was very complicated because she was born with defects like a hole in the heart. The blood supply to the lungs was totally disrupted. It was a surgical challenge to recreate things which were never there since her birth. We had to create the absent structures like pulmonary artery and pulmonary valve and close the hole in the heart. She was lucky to have survived for the last 17 years despite such congenital conditions. It would have been difficult for her to continue for the next few years had she not undergone a surgery."

For Anshu, who spent her whole life struggling with breathing problems, the surgery is a new shot at life and she hopes to become a doctor someday.

"I used to suffer a lot. When I went for tuitions I used to stop after every few steps. My eyes used to turn red and my whole body used to hurt. In future I want to study more and want to become a doctor," she said. She currently studies in Class 11.

Anshu's father Birender Mahto is also beaming with happiness. He said, "The treatment has been done very well and I am very happy. My daughter will be able to walk normally. Since the surgery, there has been a huge difference. She can walk easily, doesn't have swelling in her legs or headaches."

The hospital said it was their aim of providing affordable medical care to the masses that drove them towards helping Anshu.

Commander Navneet Bali, Regional Director for North India, Narayana Health said, "My group CEO Dr Immanuel Rupert saw this clipping on TV when you featured it. I got a message from him that there is a family that has been lying outside AIIMS for four months and needed a surgery. It is ingrained in our blood at Narayana Health and we have a clear mandate from our founder Dr Devi Shetty who started the hospital on the basis of providing affordable healthcare to the masses and for people in the society who are unable to get this themselves. It was more of a cultural thing for us. A complex surgery like this which lasted 10 hours would have cost around Rs 4-5 lakh in a private hospital but we did it for free because of our ethos and what we stand for."

After several difficult months, Anshu will now finally go back to Bihar and start a new life with her family on a happier note. Anshu's father said that her three younger siblings who have been staying with the grandparents have been eagerly waiting for their sister to come back home.