According to the BJP, 15 out of 17 district panchayat members of JDU of Daman and Diu and the entire unit of state JDU joined the BJP today against Nitish Kumar's decision to leave the BJP. 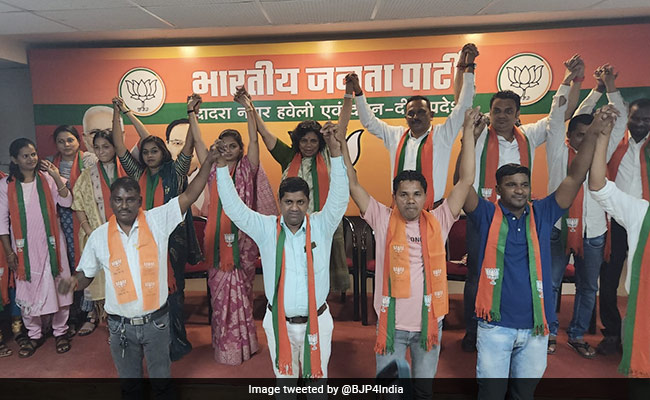 Daman and Diu unit of Nitish Kumar's party JDU merged with the BJP on Monday.

The Bharatiya Janata Party (BJP) delivered yet another blow to Janata Dal-United (JDU) as the Daman and Diu unit of Nitish Kumar's party merged with the saffron party on Monday.

"15 out of 17 district panchayat members of JDU of Daman and Diu and the entire unit of state JDU joined the BJP today against Nitish Kumar's decision to leave the BJP which had given impetus to development in Bihar and to choose the 'Bahubali', corrupt and a dynastic party," BJP said in a tweet on Monday.

Notably, a few days ago, a bulk of JDU MLAs in Arunachal Pradesh joined the saffron party and very recently 5 out of 7 MLAs from Manipur embraced the BJP.

The Bharatiya Janata Party secured a majority of 32 seats in the 60-member state Assembly in the recently held Assembly elections, results of which were declared on March 10.

On 25 August 2022, the lone JDU MLA from Arunachal Pradesh joined the saffron party in the presence of national president JP Nadda and Arunachal CM Pema Khandu.

BJP stands at 49 out of 60 Assembly seats (MLA) with the merger of lone JDU MLA Techi Kaso with BJP. Out of 9 Corporators of JDU, 8 have joined BJP; now total BJP corporators is 18 out of 20.

This comes at a time when Nitish Kumar met a few leaders in Patna and Delhi to garner support against the Modi-led NDA.

Those aware of the development say that the BJP has decided to hit back at the JDU after what transpired in Bihar recently.

Recently, Nitish Kumar had broken away from the BJP and formed a government with the RJD and other parties earlier this month. The Chief Minister and his deputy - RJD's Tejashwi Yadav - took oath on August 10.

The Bihar Grand Alliance has a combined strength of 163. Its effective strength climbed to 164 after Independent MLA Sumit Kumar Singh extended its support to Nitish Kumar.