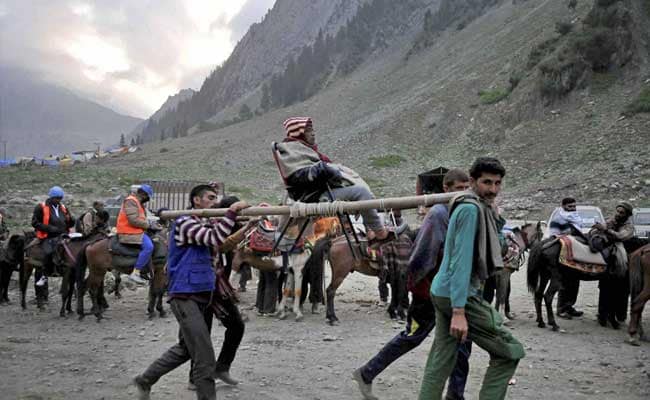 Amarnath yatra, which was suspended yesterday morning, resumed in the evening. (File Photo)

Jammu: A fresh batch of 1,000 pilgrims today left for the twin base camps of Amarnath cave shrine in south Kashmir Himalayas amidst tight security.

The yatra, which was suspended yesterday morning due to tense situation in the Valley, resumed in the evening.

A total of 1,000 pilgrims, including 731 males, 219 females and 50 sadhus, left in a cavalcade of 29 vehicles from Bhagwati Nagar base camp in Jammu for the two base camps of Pahalgam and Baltal in Kashmir this morning, Deputy Commissioner, Jammu, Simrandeep Singh said.

"The convoy of pilgrims has left amidst tight mobile security cover," he said.

The yatra has faced suspension three times in the past 10 days due to the ongoing unrest in the Valley. It was initially suspended on July 9 and resumed on July 11.

It was stopped again on July 14 and restarted two days later. The toll in the 10-day-long spate of violence in the Valley has mounted to 42.