Trucks were allowed to move on Monday after protests across the valley; growers say 8,000 trucks with apples worth crores were stuck

Former Jammu and Kashmir Chief Minister Mehbooba Mufti today said halting of apple-carrying trucks for days on the Srinagar-Jammu National Highway by traffic police "is like economic terrorism". She threatened to block all movement on the highway if the government fails to ensure smooth transport of the harvested fruit from Kashmir to mandis across the country.

The traffic authorities allowed the movement on Monday evening, and said "natural reasons" — rain and shooting stones — were to blame for the halt. On the ground, NDTV had found that vehicles other than trucks were allowed to move even when the trucks were not.

Addressing apple growers at Shopian, Ms Mufti said the halt was a conspiracy to destroy the apple industry, a mainstay of the region's economy. 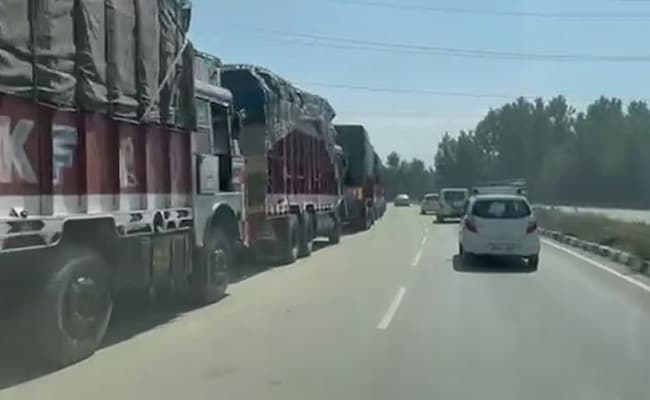 Apple trucks stuck awaiting clearance to move on the Srinagar-Jammu highway on September 26.

The last week was traumatising for the growers, who said 8,000 trucks remained stranded for several days on the highway. On an average each truck carries apple worth Rs 8 lakh — this means apple worth Rs 640 crore was stuck. An official statement on Monday said 4,000 trucks were to be cleared.

Ms Mufti sought to equate the situation with Palestine. "It's like economic terrorism. They (central government) say they will finish militancy here. But biggest terrorism is unleashed by government against people and horticulture," she said.

Traffic police denied charges of halting trucks for more than two days. Police even threatened action against those spreading any false information about it. "In no case any apple truck remained stranded at Quazigund for more than two days, contrary to the false claims and propaganda that is being spread by vested interests," said a statement by the traffic police headquarters.

It said the traffic police chief has issued instructions that "apple laden trucks are given priority on the highway and smooth transportation of apple is ensured".

Trucks were allowed to move on Monday after protests across the valley. Growers say actual losses will be known only when the trucks reach markets.

Kashmir has produced over 22 lakh metric tonnes of apple, more than 70% of total production in the country. The Rs 10,000-crore apple industry is the bedrock of Kashmir's economy. Apple growers say due obstacles in transportation, freight charges have doubled.