Police arrested the accused at his residence in a record time of 24 hours with the help of CCTV cameras and the local community. 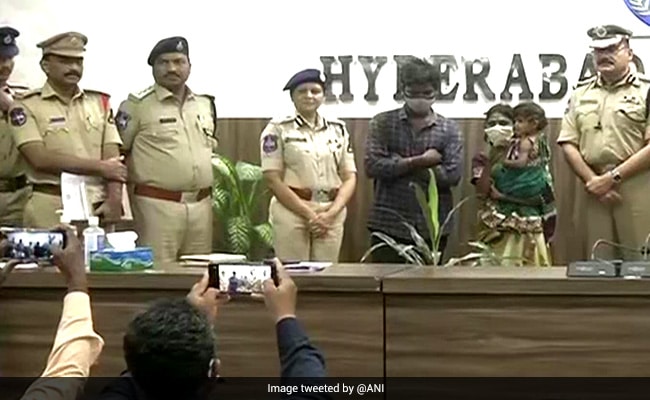 A two-and-half-year-old girl named Ammulu was kidnapped by an auto-rickshaw driver: Police

The Hyderabad Police rescued a baby girl and arrested the kidnapper within twenty-four hours of the crime taking place.

A two-and-half-year-old girl named Ammulu, who was kidnapped by an auto-rickshaw driver named K. Sravan Kumar at Malakpet, for selling to a childless couple for money, was rescued within 24 hours, informed Anjani Kumar, senior police official, Hyderabad City on Friday.

The girl's father, 27-year-old ragpicker Sudugu Ajay, was sleeping with his wife, daughter and a friend on a footpath at Moosarambagh. At 01:30 hrs on January 28, he found that his daughter was missing and lodged a complaint at the Malakpet police station.

"Under the leadership of Joint Commissioner of Police, Ramesh Reddy, several teams were formed, to trace and rescue the kidnapped baby girl," said Mr Kumar.

He further said that police solved this case and arrested the accused at his residence in Golnaka area in a record time of 24 hours with the help of CCTV cameras and the local community.

"Police produced him before the court and demanded his remand," Mr Kumar further said.

He told the media that preventing crime against women is the topmost priority for the Hyderabad Police.

He also informed that under ''Operation Smile'' launched by the Hyderabad Police earlier, 376 children have been rescued in Hyderabad in 2021 so far.

"I urge all the Residents Welfare Associations of Hyderabad, apartment associations and business groups to install CCTV cameras at deserted locations to prevent such crimes," he said.

Hyderabad Builders, Desperate For Labour, Will Fly Back Migrants