Watch: Cars Float, Bang Against Each Other In Waterlogged Gurugram

The IMD has issued an orange alert for Gurgaon, asking authorities to remain prepared for disruption in water and electricity supply as it expects "heavy to very heavy rain" on Monday and Tuesday. Water-logging in Gurgaon has caused several cars to be submerged

Heavy rain lashed Haryana's Gurgaon this morning, flooding several areas and halting traffic at major intersections. Several videos emerged on the internet that showed vehicles partially submerged and water flowing on the streets in the financial and technology hub. People had to wade through knee-deep water in Sector 10. CCTV footage showed a street in the Palam Vihar neighbourhood heavily inundated. Several parked vehicles floated briefly as a car passed the street and displaced the stagnant water.

While the parked vehicles hit each other and appeared as if they floated in the water, a car moved past the street without even touching them.

The India Meteorology Department (IMD) has issued an orange alert for Gurgaon, asking authorities to remain prepared for disruption in water and electricity supply as it expects “heavy to very heavy rain with thunderstorm or lightning” on Monday and Tuesday. It has also asked traffic authorities to be prepared for jams as vehicles could be stuck in low-lying areas after water-logging.

#DelhiRains| In Gurugram, floating cars knock against each other.
Delhi-NCR witnessed incessant overnight rains that caused waterlogging in several parts of the city. pic.twitter.com/XhigjvgtiU

The southwest monsoon officially arrived in Delhi and neighbouring areas on July 13, but Gurgaon had received light rain only so far. On Monday morning, it received the first spell of heavy rainfall this season after days of hot and humid conditions. 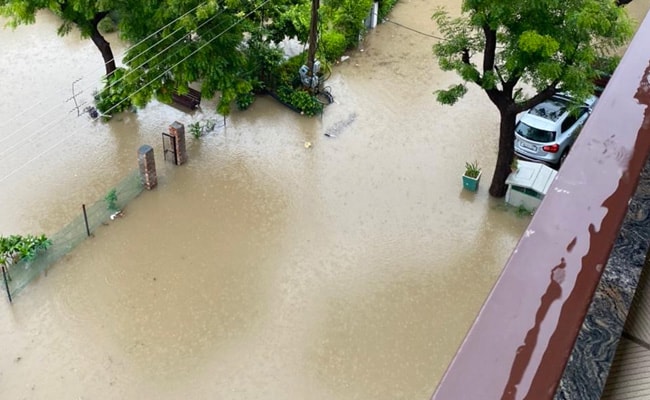 A waterlogged street in Gurgaon

An ANI report stated that according to the IMD prediction in the morning hours of Monday, a thunderstorm with light to moderate intensity rain is likely in Delhi, Uttar Pradesh, Haryana, and Rajasthan.

3 Dead In Building Collapse In Gurgaon Amid Heavy Rains