Ryan International School Murder Case: The CBI is investigating a child for another child's murder for the first time.

New Delhi: A 16-year-old schoolboy accused of slitting the throat of Pradyuman Thakur, his junior at the Ryan International School in Gurgaon, was taken to knife shops on Thursday and will also be taken to school as a CBI team tried to reconstruct the murder.

The CBI questioned the Class 11 student in custody for six hours before taking him to select shops to find out where the murder weapon - a knife - may have been bought. Sources say until tomorrow, he will be taken to his school so he can retrace his steps on September 8, when seven-year-old Pradyuman was found murdered in a toilet near his classroom.

Investigators have told a Juvenile Court that the teen confessed to the crime in the presence of his father, independent witnesses and a social welfare board member. The motive, apparently, was to delay an exam, but the CBI is yet to find clinching evidence.

The agency, for the first time investigating a child for another child's murder, was granted custody of the student on Wednesday and will remain so until tomorrow. 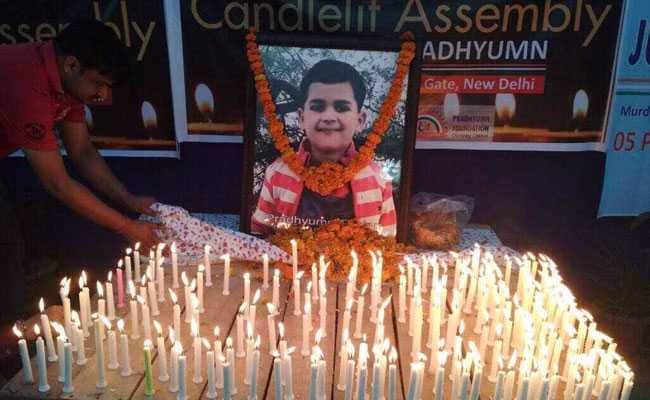 Pradyuman, a Class 2 student, was found murdered some 15 minutes after he was dropped off by his father, along with his older sister at 7.55 am.

Seven hours later, the police told the media that they had the killer. Schoolbus conductor Ashok Kumar, they said, murdered Pradyuman after trying to sexually assault him. They claimed that they had recovered the knife from him.

The botch-up, according to the CBI, started from there.

"Gurugram Police claimed that Ashok had taken the bus driver's knife with him to the toilet to clean it. There he saw Pradyuman alone and tried to sexually assault him, and when he shouted for help, he slit his neck," an official said, referring to the police theory.

Two days after the arrest, the driver said there was no knife in the bus.

The police said they would file a charge-sheet in seven days.

There was no such charge-sheet when the CBI took over the case on September 29 after Pradyuman's family insisted that the police was in a hurry to produce results and was barking up the wrong tree.

The child's autopsy report didn't mention sexual assault, which made the CBI wonder about the police investigation.

The gardener, who was among the first to see Pradyuman's body, told the CBI that he saw Ashok Kumar entering the toilet but didn't see a knife. He also told officials that two students told him Pradyuman was lying in a pool of blood in the washroom.

When the students were questioned, they mentioned a Class 11 student who was seen with a knife earlier.

The investigation changed course. The CBI examined extended and scientifically enhanced CCTV footage from near the toilet and saw the teenager near the toilet.

A background check of the student revealed that he had received psychiatric counselling for a year and had "anger management issues".

"When we were questioning him, we realized that he used to pick up fights in school and was termed rowdy by many of his classmates," an officer says. Parents and locals had protested at Gurgaon's Ryan International School in September. (File)

More inquiries revealed that a day before Pradyuman was killed, he had told a few classmates that they shouldn't prepare for exams as there would be a school holiday next day (September 8).

But there is no solid evidence connecting the teen student to such a brutal murder, which left Pradyuman's vocal cord and wind-pipe ruptured.

The agency claims the teenager was not good in studies - as evidenced by his report cards - and wanted to postpone school exams and a parent-teacher meeting. Without proof, none of this will wash in court as motive.

It is still not clear whether the crime was planned or spur-of-the-moment. Officials are questioning why Pradyuman was killed so violently without any sexual assault involved.

Promoted
Listen to the latest songs, only on JioSaavn.com
After committing the crime, the CBI says, the teenager flushed the knife down the pot. But no forensic evidence links him to the weapon so far.

The agency says the possibility of the Haryana police planting evidence (the knife) on Ashok Kumar cannot be ruled out. "Our probe is going on we will investigate this also and then take a call whether it was deliberately amateur probe or was it all done  at someone's instance," reveals the officer.