Last week, at the same toll booth in Gurgaon, a woman employee was punched by a man. 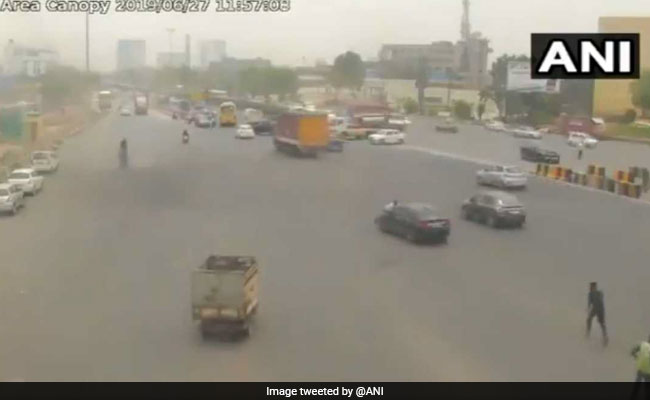 Gurgaon road rage: The driver of the speeding car was arrested.

An attendant at a toll booth in Gurgaon near Delhi was dragged on the bonnet of a car, an incident of road rage that was captured on CCTV camera. Last week, at the same toll booth, a woman employee was punched by a man.

On Thursday, a man driving a black sedan sped his car with the toll booth attendant clinging on to the bonnet for a few metres.

In the CCTV video, a man wearing white shirt can be seen clinging on to the car as four other men run after the car . When the car stopped, the employee got down the bonnet and tried to block the car along with the other men. But the driver sped away.

#WATCH A Gurugram Kherki Daula Toll Plaza employee carried on the bonnet of a speeding car today. SP Gurugram, Shamsher Singh, says, "An investigation is underway, legal action will be taken and accused will be arrested soon." pic.twitter.com/bfE4udC6E8

The driver was later arrested after the police have registered a complaint and started an investigation using the CCTV footage.

Attacks on toll booth operators by drivers who refuse to pay toll have been frequently reported from this area in the past.

Last Friday, a woman attendant at the Kherki Daula toll booth was punched by a man. CCTV clips showed the driver getting out of his white SUV and walking to the tall booth. He then grabbed the woman's hands and punched her face from the small window of the cabin.

In April, a man drove away with a toll booth attendant stuck on the SUV's bonnet after he tried to stop the vehicle in Gurgaon. The entire sequence was also captured by the CCTV camera installed at the booth.

Another woman toll collector was allegedly molested by some men at Kherki Daula toll plaza after she asked them to pay the fare in November 2017. A month later, a driver attacked a woman attendant at the same toll plaza and tore her clothes in an incident that was captured on CCTV camera.