Goa Elections 2017: Why BJP's Michael Lobo, Who Once Washed Dishes, Is Sure He Will Win 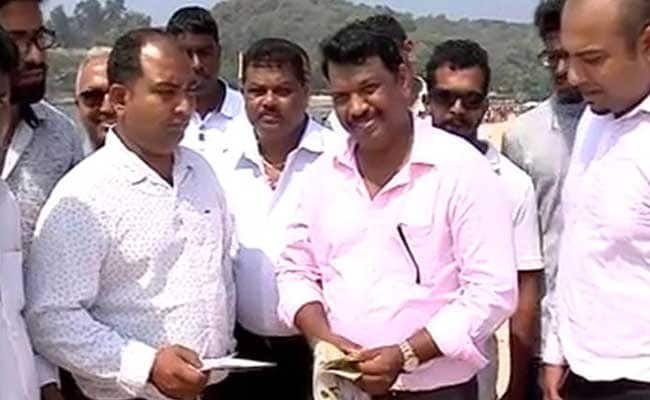 Goa elections 2017: Michael Lobo's popularity is built around his reputation as a hands-on MLA.

Panaji: Michael Lobo, BJP legislator from Goa's Calangute, is the envy of voters in neighbouring constituencies. His supporters believe the ruling party, which has not named a chief ministerial candidate for Goa, will do well to project the 40-year-old for the top post.

"I know I'm popular because I'm a man from Goa. I interact with people and know about their problems. I'll win with full majority. You can interview me again on the March 11", he told NDTV.


Michael Lobo's popularity in the constituency is built around his reputation as a hands-on MLA. He stands at the site to inspect all work on roads, an important agenda in Goa.

"I am a builder myself. I make sure I keep an eye on the work myself. Engineers can be lazy sometimes," Mr Lobo said.

Mr Lobo is also credited with getting Goa its first state-of-the-art solid waste treatment plant as garbage management has been an issue in the state.

"I started working when I was 13. My father was unwell and I had to support my family. I dropped out after first year because I didn't have enough money, but made sure my elder sister completed her graduation", Mr Lobo said.

He washed dishes at a restaurant, became a waiter before becoming a manager. Today, he owns three resorts and six restaurants in the Baga-Calangute area.

Michael Lobo is credited with getting Goa its first state of the art solid waste treatment plant.

"He is always available for us. Other constituencies are jealous because we have an MLA like him," said Harry Masparenhas, 52, who owns a small eatery near Baga.

Promoted
Listen to the latest songs, only on JioSaavn.com
"He will be the next Chief Minister," said another worker.

The BJP, which hopes to get reelected in Goa, had dropped hints that Defence Minister Manohar Parrikar, Goa's most popular BJP man, could return if the party is elected to power again. In Calangute, residents say if Mr Parrikar does not return, Michael Lobo would be a better pick rather than Chief Minister Laxmikant Parsekar, who took charge when Mr Parrikar was called to Delhi on national duty.