On Camera, Cops Save Man From Falling Under Train At Ghaziabad Station

The old man seemed only partially conscious when he slipped at the door of the train and got dragged by it. 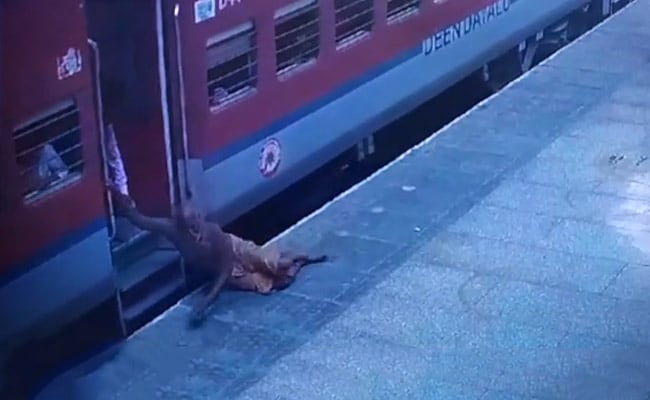 A video of two Railway Protection Force (RPF) constables rushing into action to save an old man who had fallen onto the railway platform from a moving train has emerged online. The hair-raising incident happened as the Gomti Express began to leave the Ghaziabad railway station on Tuesday morning. The video showed the old man slipping at the door, apparently in a bid to get off the moving train. As his body touched the platform, he refused to let go of the door handle and got dragged with the moving train.

The old man seemed only partially conscious when he slipped at the door. The constables -- Trilok Sharma and Shyam Singh -- standing nearby ran towards the old man, as did some other people on platform number 3. The video showed the two security personnel then pulling the man away from the train as it exited the station. They then sat the man down near the enclosure for passengers on the platform.

The Railway Protection Force has praised the constables for saving the man's life.

This is not the first time when alert officials have come to the rescue.

In April, a security personnel saved a man from a similar incident at Sawai Madhopur station in Rajasthan. The man had slipped at the door and was getting dragged by the moving train. The official saved him from falling into the train-platform gap.

The same month, a railway official in Maharashtra risked his life to save a child who had fallen onto the tracks from an oncoming train. Railway pointsman Mayur Shelke ran so fast to save the child that he beat the speed of the train. The pointsman reached just in time and removed the child from the tracks in Vangani railway station.

26-Year-Old Dead In Celebratory Firing During Party In Ghaziabad: Police