Sonam Kapoor and Anand Ahuja's wedding reception was an even starrier affair than their wedding. Have you seen the fashionable cake yet? 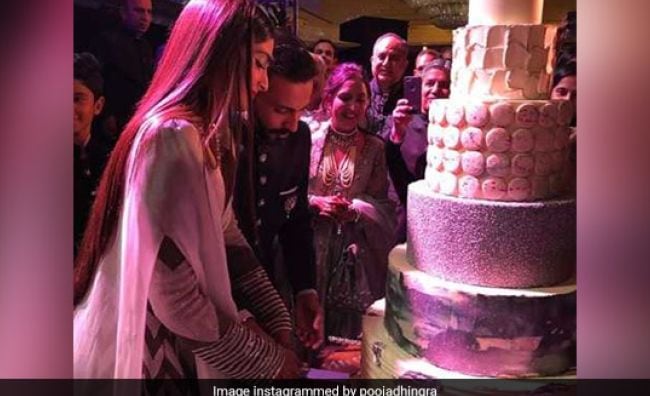 Bollywood actor Sonam Kapoor got married to her boyfriend Anand Ahuja at a fun-filled wedding at her aunt's house in Mumbai. The star-studded wedding was followed by an even more starry wedding reception, where all the who's who of the film industry turned up. From Shah Rukh and Gauri Khan to Akshay Kumar and Twinkle Khanna, Sonam Kapoor and Anand Ahuja's wedding reception was a glamour fest, where the lovely couple made their first appearance as man and wife in public. Sonam's closest family and friends were in attendance too of course.

The couple cut a fashionable and truly stunning multi-tiered reception cake to ring in their new life. We just can't get over the beauty and artfulness of this six tier tall cake, which was crafted by pastry chef Pooja Dhingra, who is also a close friend of Sonam Kapoor's. Pooja also shared a picture of the cake on her Instagram page.

Also Read: Sonam Kapoor is A Big Foodie and We Have Proof

Doesn't that look mesmerizing? All we can think about is if there is still some cake left from last night? Pooja Dhingra's Instagram post about this amazing cake was accompanied by a very sweet message, where she narrated how difficult it was to design a cake for this 'unconventional' couple. Here's what she said: "This was one of the hardest cakes for me to design because what can you make for a couple that's anything but conventional. A couple that doesn't fit into boxes. Something with layers, with textures, where colours merge and blend and shine. Something with structure but also flowing, something solid but full of warmth and love. Congratulations @sonamkapoor @anandahuja and thank you for being in my life!"

Also Read: Sonam Kapoor Showed Some Love To This Vegetarian Recipe And It Looks Delicious!

Now that's what we call "wedding cake goals"! These cakes are more fashionable than our wardrobes will probably ever be. We can only imagine how exquisite they taste. We wish Sonam Kapoor and Anand Ahuja a very happy married life!