Here's How Skipping Breakfast May Lead To Weight Gain

According to a latest study, skipping breakfast can disrupt the body's internal clock and cause weight gain, even if one does not overeat for the rest of the day. 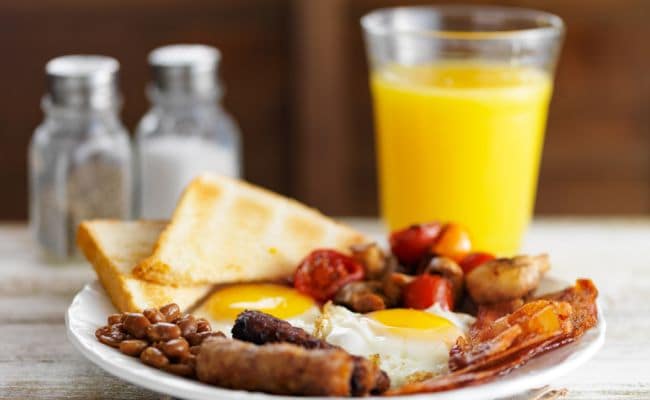 Pressed for time to grab a breakfast? Think you'll sneak in something on the way to office. Sure, the idea may save you some amount of time but the same can't be said about the barrage of calories you are paving way for. Breakfast literally means, 'breaking the fast', after and eight hour long sleep. Several nutritionists also dub it the most important meal for the day. Not having breakfast not only register a dip in your metabolism (which could be best capitalized in the mornings), but also leave you lethargic right at the start of the day and craving for ANY kind of food(fattening or sugar laden) available later in the day.

According to a latest study, skipping breakfast can disrupt the body's internal clock and cause weight gain, even if one does not overeat for the rest of the day. Skipping breakfast has been linked withobesity, type 2 diabetes, hypertension and cardiovascular disease, but the precise impact of meal times on the body's internal clock wasn't as clear up until now.
The study conducted by researchers from Tel Aviv University (TAU) and Hebrew University in Israel found that the effect of breakfast on the expression of "clock genes" that regulate the post-meal glucose and insulin responses of both healthy individuals and diabetics.

"The circadian clock gene not only regulates the circadian changes of glucose metabolism, but also regulates our body weight, blood pressure, endothelial function and atherosclerosis," said Jakubowicz.
"Proper meal timing - such as consuming breakfast before 9:30 am - could lead to an improvement of the entire metabolism of the body, facilitate weight loss, and delay complications associated with type 2 diabetes and other age-related disorders," she said.

18 healthy volunteers and 18 obese volunteers with diabetes were examined for the study. The study took account of their breakfast and lunch patterns, and in a test day featuring only lunch.
On both days, the researchers conducted blood tests on the participants to measure their postprandial clock gene expression, plasma glucose, insulin and intact glucagon-like peptide-1 (iGLP-1) and dipeptidyl peptidase IV (DPP-IV) plasma activity.

Promoted
Listen to the latest songs, only on JioSaavn.com
"Our study showed that breakfast consumption triggers the proper cyclic clock gene expression leading to improved glycaemic control," said Jakubowicz.
"In both healthy individuals and in diabetics, breakfast consumption acutely improved the expression of specific clock genes linked to more efficient weight loss, and was associated with improved glucose and insulin levels after lunch," she said.
On the other hand, in the test days featuring only lunch - when participants skipped breakfast - the clock genes related to weight loss were down-regulated, leading to blood sugar spikes and poor insulin responses for the rest of the day, Which goes on to indicate that missing out on breakfast leads to weight gain even if you are not overeating the rest of the day.
"The fact that we can change the gene's expression in just four hours is very impressive," said Jakubowicz.