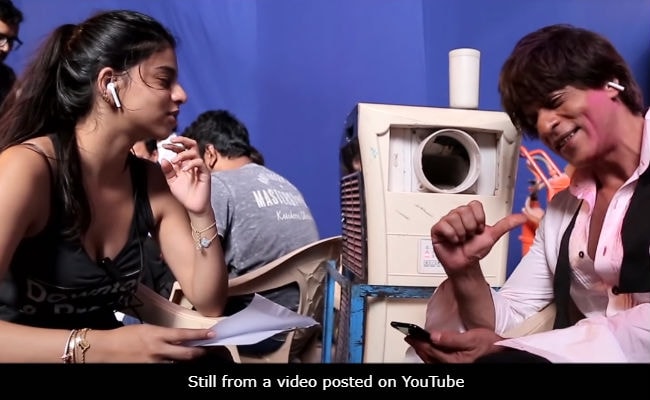 Shah Rukh Khan and Suhana on the sets of Zero. (Image courtesy: YouTube)

Shah Rukh Khan shared a BTS video from the sets of his upcoming project Zero, which was focussed on how they filmed the song Mere Naam Tu. When he shared the video, SRK said that it was "one of the most beautiful experiences from the shoot." Later, the 53-year-old actor shared a still from the video, which showed that his daughter Suhana was on the sets when he filmed Mere Naam Tu. The back story, as narrated by Shah Rukh Khan: "Of all the things I have done for Mere Naam Tu... this is the sweetest. My daughter teaching me to get the lyrics right on the sets. Hope after she sees the song she approves."

Of all the things I have done for Mere Naam Tu...this is the sweetest. My daughter teaching me to get the lyrics right on the sets. Hope after she sees the song she approves... pic.twitter.com/qfQ2hhEF9F

The song released last month and we don't know about Suhana, but SRK, we loved it. As of today, the song has over 34 million views on YouTube.

And here's the final product:

Zero is the story of vertically challenged Bauua Singh (Shah Rukh Khan) who falls in love with a cerebral palsy patient Aafia Yusufzai Bhinder (Anushka Sharma), who is a NASA scientist. Bauua breaks Aafia's heart when he gets involved with an alcoholic actress Babita Singh (Katrina Kaif).

After realising his mistake he wants to return to Aafia but is it too late? The answer will be in theatres near you on December 21.