Zero: These Pics Of Katrina Kaif Are Making The Wait For Husn Parcham All The More Difficult

"Somebody asked me what Husn Parcham means. Well it means announcement of one's beauty," Shah Rukh Khan captioned the photos of Katrina 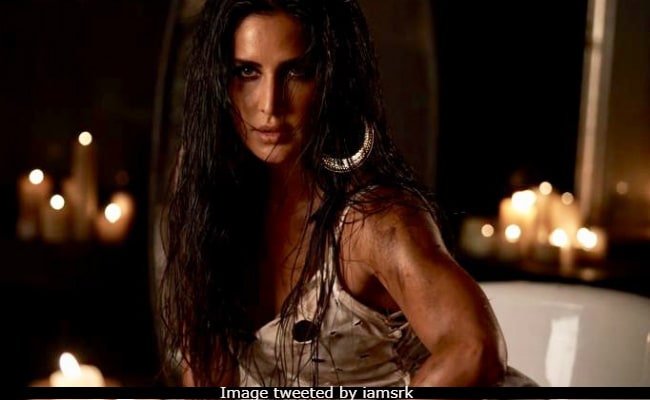 Thank you, Shah Rukh Khan for sharing this photo of Katrina (courtesy iamsrk)

Katrina Kaif's new photos from Zero's new song Husn Parcham are such a striking reminder that the "most sizzling song of the year" is about to be released on Wednesday. On Tuesday evening, Shah Rukh Khan took up the responsibility of sharing a few unseen photos of Katrina as Babita Kumari (the alcoholic superstar she plays in the movie). "Somebody asked me what Husn Parcham means. Well it means announcement of one's beauty...roughly. Smoothly it means just this...! Song out tomorrow..." Shah Rukh captioned the first photo of Katrina, a glimpse of which we got in the teaser of the song. The 53-year-old superstar also shared another one of Katrina just because there can never be enough of the actress.

How lovely is this girl!! Can't wait to show you all Husn Parcham...let's just elect her in our hearts tomorrow. pic.twitter.com/RYxcONYOHz

Somebody asked me what Husn Parcham means. Well it means announcement of ones beauty...roughly. Smoothly it means just this...!!! Song out tomorrow...#HusnParchampic.twitter.com/idzR6i2Lbs

On Monday, Shah Rukh also dropped the teaser of Husn Parcham, which will be the third song from Zero's playlist to be released. Sharing the teaser, Shah Rukh described it as the "most sizzling song of the year": "Poore desh mein chakka jaam lag jayega. Jab Babita Kumari ka Husn Parcham lehrayega."

The teaser of the song reveals that in Husn Parcham, Shah Rukh Khan's character Bauua Singh will meet Babita Kumari for the first time. The vertically challenged Bauua Singh appears to be prepping for his wedding to Aafia, a specially-abled scientist played by Anushka Sharma.

Directed by Aanand L Rai, Zero reunites Katrina Kaif, Anushka Sharma and Shah Rukh Khan together for the first time after 2012's Jab Tak Hai Jaan. Zero is all set to hit screens on December 21, ahead of which Shah Rukh and Katrina are busy with promotional duties as Anushka is currently in Australia with Virat Kohli.