Zero Song Issaqbaazi: In Shah Rukh Khan Vs Salman Khan, Their Bromance Is The Winner 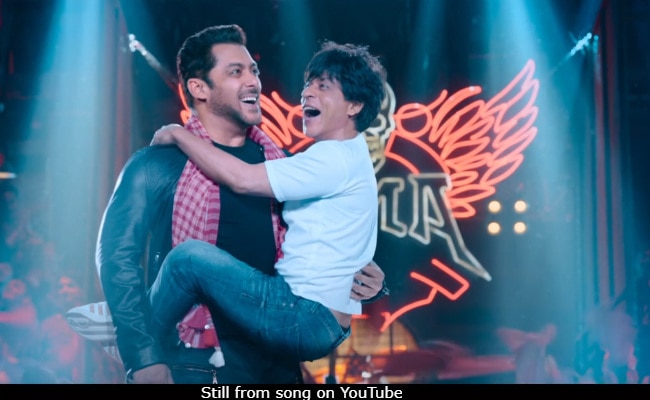 Shah Rukh Khan kept his promise and shared a brand new song titled Issaqbaazi from Zero on Tuesday. Salman Khan is the surprise element in the song. Salman Khan, who features in a cameo in Zero, makes an appearance in his usual superstar persona in Issaqbaazi. The song begins with Babita Kumari (an alcoholic actress played by Katrina Kaif) kissing Bauua Singh (the vertically challenged character played by Shah Rukh). An elated Bauua Singh then decides to take part in a dance competition, which appears to be judged by Salman. Choreographers Ganesh Acharya and Remo D'Souza join Bauua Singh on stage as competitors but he beats them hands down.

Impressed with Bauua Singh's dance moves, Salman Khan joins him on the floor and then there was no stopping them. During the dance-off, Bauua appears to tease Salman as he expresses his feelings for Babita Kumari through the lyrics. The dance battle then switches to a war or words but needless to say the Bauua gets to have the last word and ends the dance-off by adorably hugging and kissing Salman Khan.

Composed by Ajay-Atul, Issaqbaazi has been sung by Sukhwinder Singh and Divya Kumar. Watch Issaqbaazi here:

Directed by Aanand L Rai, Zero is all set to hit screens on December 21.