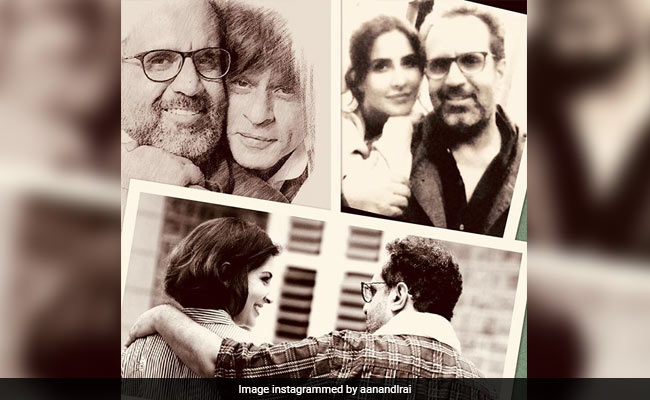 Director Aanand L Rai, whose film Zero is all set to hit the screens on December this year, shared a heartfelt post on Instagram thanking Shah Rukh Khan, Katrina Kaif and Anushka Sharma - the lead actors of the film - for an incredible journey. "Sometimes we never come to know the value of a moment until it becomes a memory. Thank you for such beautiful memories in this heartfelt journey of Zero," Anand L Rai wrote on Instagram. He accompanied the post with a collage featuring Shah Rukh, Katrina and Anushka, which appears to have been taken on the sets of the film. While SRK, Katrina and Anushka have shared screen space in Yash Chopra's Jab Tak Hai Jaan, this is the trio's first collaboration with Anand L Rai.

Sometimes we never come to know the value of a moment until it becomes a memory. Thank you for such beautiful memories in this heartfelt journey of #zero.

Earlier, Katrina Kaif had shared a photo of herself with Zero director Aanand L Rai and said: "Thank you Aanand L Rai for the conversations and for always listening to my ramblings."

Zero showcases the story of a dwarf named Bauuah Singh( played by Shah Rukh Khan), who travels all the way to Delhi in search for the perfect life-partner, where he falls in love with a specially abled scientist named Aafia Yusufzai Bhinder (Anushka). Katrina Kaif plays the role of a superstar named Babita Kumari in the film.

The trailer of Zero was unveiled earlier this month and needless to say it went crazy viral. The trailer has 92 million views on YouTube so far.

Watch the trailer of Zero here:

In case you didn't know, it was Salman Khan who had suggested Zero to SRK. At the trailer launch event, Shah Rukh said: "It's not true that he (Aanand L Rai) asked a lot of people... Salman had actually called me and said, 'there's this film, do it."