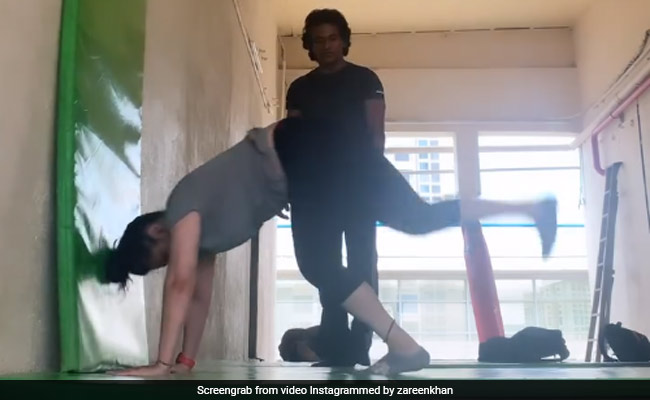 Zareen Khan in a still from the video. (courtesy zareenkhan)

Actress Zareen Khan, who has often talked about body positivity in her Instagram posts, shared a new video, in which she can be seen trying out gymnastics. The actress, revealed in her extensive caption about how she was "demotivated" by people for trying out the new fitness form. She wrote: "To New Beginnings! Gymnastics is something I always wanted to learn. But whenever I shared this thought with people around me, they had different takes on it. Some said I cannot learn it now as I've crossed a certain age limit and because this is something that's learnt when you are a kid and your body can be moulded as you grow."

Writing about the different reasons people suggested her to refrain from trying out gymnastics, Zareen Khan added, "Some said I'm overweight for this exercise form/sport, and only people who are thin or of certain weight can do this without injuring themselves. Some said I need to have a certain level of fitness to start something so complicated as gymnastics."

Contrary to the inputs she received, the actress did her first class and she wrote: "But finally, I said 'F*** It' to all these demotivating mouths around me and did my first class with the amazing Raakesh Yadhav. And here's how it went. Feeling happy and proud, looking forward to learning a lot more."

Zareen Khan made her Bollywood debut opposite Salman Khan in Veer in 2010 and she went on to star in movies like Housefull 2, co-starring Akshay Kumar, John Abraham, Asin, Jacqueline Fernandez and Riteish Deshmukh. She also starred in Hate Story 3, Aksar 2 and the horror film 1921. She was also a part of a song in Salman Khan's 2011 film Ready. Zareen has also featured in Punjabi films like Jatt James Bond and Daaka.