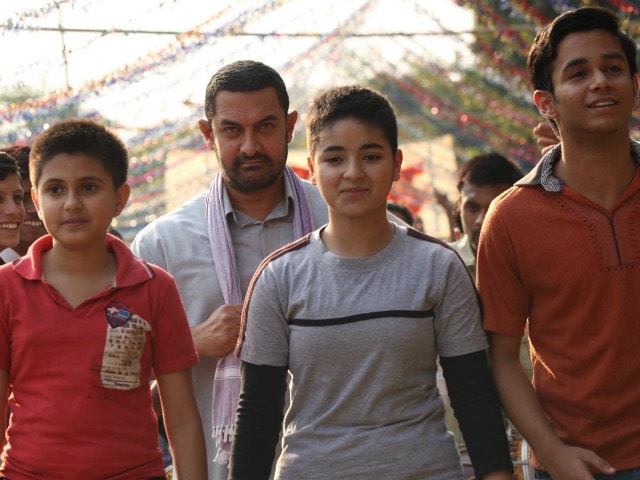 New Delhi: Actor Aamir Khan has responded on Twitter after his young Dangal co-star Zaira Wasim posted and then deleted a Facebook apology, apparently after being trolled for meeting Jammu and Kashmir chief minister Mehbooba Mufti. In a statement he posted on his account, the 51-year-old actor said: "Zaira, I want you to know we are all with you. The beauty is that bright, young, talented, hardworking, respectful, caring and courageous kids like you are a role model for kids not only in India but across the world. You are certainly a role model for me." Aamir also appealed to everyone that 16-year-old Zaira, who is a top trend on Twitter today, be left alone.

Aamir Khan's tweet is the latest of several from other Bollywood celebs. Actress-director Pooja Bhatt wrote: "And now we even consider it our privilege to devour our young? Shame! Zaira Wasim needs to be celebrated not persecuted."

Dear @zairawasim! Ur apology letter is sad but full of courage. It exposes d cowardice of people who made u write it.But u r my #RoleModel. pic.twitter.com/fCF2zlzvzC

May God give Sanity to this World. And a Bigger Perspective of Humanity beyond Religion and Patriotism. #ZairaWasim

Those who shout AZADI from the roof tops don't give an iota of AZADI to others .Poor Zaira Waseem had to apologies for her success Shame !!

To those demanding #Azadi in #Kashmir. U seem fundamentally undemocratic, bigoted n incapable of respecting any1 else's freedom #ZairaWasim

It must take extra courage to go after a 16 year old debutante. @zairawasim, you're awesome and don't let this get to you

Wrestler Geeta Phogat, who is played in Dangal by Zaira, and politicians Omar Abdullah and Ravi Shankar Prasad also tweeted in favour of the young actress.

Yesterday, Zaira Wasim posted a Facebook note apologising to "people offended or displeased by (her) recent actions or the people (she) recently met." She also wrote that she didn't want to be a role model. Zaira later deleted the post and tweeted saying she was upset that it had been "turned into national news." She deleted the tweet as well.

Promoted
Listen to the latest songs, only on JioSaavn.com
Zaira Wasim, who is Kashmiri and grew up in Srinagar, met Chief Minister Mehbooba Mufti last Saturday. She was reportedly trolled after the meeting. "When it comes to talent, youngsters from Jammu and Kashmir are next to none and we must celebrate them and not those who post their photos on Facebook with guns in their hands," Ms Mufti said on Monday.

Zaira co-starred with Aamir Khan in Dangal, playing the younger version of Geeta Phogat. She has also been cast in the actor's next production, Secret Superstar.