Young Rishi Kapoor And Even Younger Karisma In Her Tribute Post 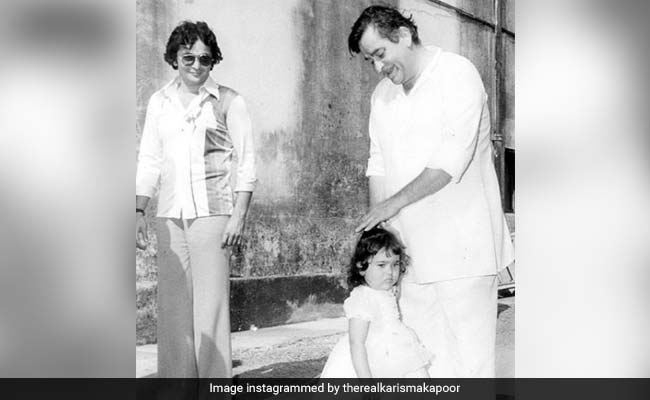 Rishi Kapoor's niece Karisma Kapoor will "miss discussing food and restaurants" with the actor, who made no secret of loving life and food. Mr Kapoor, 67, died in a Mumbai hospital on Thursday after battling cancer for two years. Karisma, daughter of Rishi Kapoor's brother Randhir, shared an old picture of herself as a child with her father and uncle - "always looking over family," she wrote. In the picture, Rishi Kapoor is dressed in the fashion of the time - big pants, sunglasses, shirt untucked. The Kapoors form a vast film dynasty - Rishi and Randhir Kapoor, sons of actor-director Raj Kapoor and grandsons of theatre pioneer Prithiviraj Kapoor, belong to the third generation; Karisma, her sister Kareena, Rishi Kapoor's son Ranbir and other cousins make up the fourth.

Karisma's sister Kareena and her husband Saif Ali Khan were among the family members pictured at hospital on Thursday. In a statement released after Rishi Kapoor's death, fans and well-wishers were asked to respect the rules of the lockdown.

Rishi Kapoor, star of films such as Chandni and Karz, was taken to hospital yesterday. Brother Randhir Kapoor told news agency PTI that the actor was "stable." Mr Kapoor spent much of the last two years being treated for cancer in New York. He returned to Mumbai last September, after "11 years and 11 days," as he said in a tweet.

Rishi Kapoor's last film was 2019's The Body. He was to begin work with Deepika Padukone on an adaptation of Hollywood hit The Intern.