"But you are smiling in your nap also! Waah," Arjun attempted to troll Malaika but she was in a mushy kind of a mood. Arjun and Malaika, just like this forever (courtesy arjunkapoor)

Arjun Kapoor, who is spending his quarantine days by commenting on Instagram posts of his friends, dropped an ROFL on girlfriend Malaika Arora's Instagram. On Tuesday afternoon, Malaika shared a collage of sleeping photos of she and her besties (Kareena Kapoor included but more on that later) on Instagram and captioned it: "Friends that nap together, stay forever." In the photo, the sleeping Malaika sports a subtle smile on her face, which did not go unnoticed by Arjun Kapoor, who had to had to share the observation.

"But you know I smile in my sleep," Malaika responded in the comments section with the smirk smiley. Here's a look at Malaika and Arjun's PDA on Instagram: 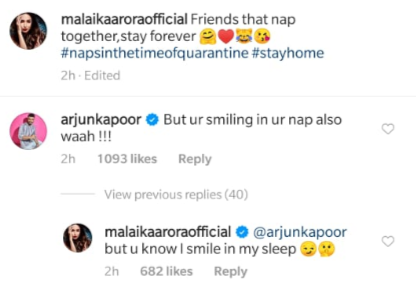 Malaika and Arjun may not post a lot of photos with each other on Instagram but there's no end to their PDA on social media. On Janta Curfew, the couple were spotted clapping together from the balcony to cheer for Covid-19 fighters. Here's how they are spending their quarantine - Malaika is busy with yoga and cooking while Arjun's pet dog Maximus is keeping him occupied and some major work-out at his home gym.

I love to cook! I love cooking for my family and friends but with my busy schedule, I hardly get time to pursue this passion of mine. But with this self isolation upon us, I thought of utilising this time in a constructive and healthy way by cooking some sumptuous and delicious 'Malabari veg stew for the soul'. I have got this recipe from mom @joycearora and a bit from my friend Maunika @cookinacurry who's a lovely cook. Everyone at home simply loves this stew and we are going to have it with some white rice and some delicious gluten-free, vegan chickpea bread that my friend Raveena @iamayogisattva made for me. M in for a lovely treat, I hope you too utilise this time to do something positive and healthy. Stay calm and stay safe! #stayhome#quarantine #covid_19

Quarantine Day 3. Can't deal, Feels surreal The paranoia is real, maybe its her way of putting us back on an even keel. #hiddentalents #rhymeslayer #selfieking

Bollywood's new couple on the block, Arjun and Malaika always send the paparazzi into a tizzy with their appearances together.