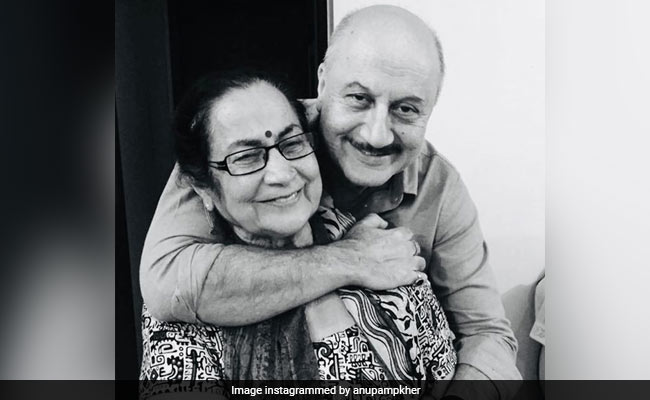 Actor Anupam Kher's mother Dulari turned a year older today. How old she is now? Well, we don't know that because even she doesn't remember her age. To mark his mother's birthday, Anupam Kher shared several pictures of himself and the birthday girl on social media. While one picture was a throwback from Anupam Kher's childhood, rest of them are from recent times. Sharing the pictures on Instagram, the actor complemented them with a long caption. "Happy Birthday Dearest Mata! You were 16 when you got married and 17 when you had me. You are the most natural person in the world. For most part of my life, you didn't make your presence felt," he wrote. "Silently taking care of all of us. You have no idea how you are loved by everybody. May God give you long and healthy life," he added.

Anupam Kher's post received a lot of comments from his fans, who wished his mother Dulari on her birthday. Singer Sonu Nigam also commented on the post and wrote: "Happy birthday to Mata."

Anupam Kher also visited his mother's house today to celebrate her birthday. He shared a video from the birthday celebrations on Instagram. In the video, he could be seen spending time and cutting the birthday cake with his mother. The video also featured Anupam's younger brother Raju Kher and the actor's friend, filmmaker Ashoke Pandit.

Check out how Anupam Kher celebrated his mother's birthday here:

As mentioned above, Anupam Kher keeps sharing adorable videos of his mother on social media. Here's a recent video of the actor with his mother Dulari.

In terms of work, Anupam Kher has appeared in films like Saaransh, Hotel Mumbai, A Wednesday and many more.