"Her values were all I had when I came to Mumbai to be an actor with Rs 37," said Anupam Kher 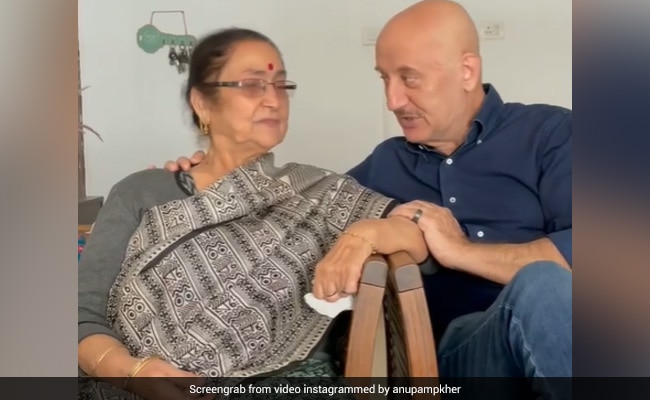 Anupam Kher, in a post for Humans Of Bombay, opened up about his equation with his mother Dulari and shared how she shaped him as a person. The 65-year-old began by recalling his childhood: "I have vivid memories of Mom dropping me to school. Before leaving, she'd say, 'Your best day is today.' And as a kid, I believed it. It helped me dream; made me forget how poor we were. Papa only made 90 Rs. a month, so Mom had to sell her jewellery to put us into good schools. But I was terrible at studies, so Mom was worried. If Papa was lenient, she'd say, 'Zyada tareef mat karo'; she wanted to keep us focused."

Anupam Kher added: "Mom was responsible for shaping me as a person - I was 10 when a Sadhu came to school; Mom gave me 5 paise to give him. But I spent 2 paise and kept the rest in my bag. When Mom asked, I lied. Later when she found the money, she made me stand outside for 3 hours until I confessed. Mom let me in with a promise that I wouldn't lie again."

Anupam Kher and his mother always tried to protect each other. Dulari kept the actor "grounded" even when he rose to stardom. Anupam made his acting debut in Bollywood with 1982's Aagaman but his breakthrough role was in 1984's Saaransh.

"Her values were all I had when I came to Mumbai to be an actor with 37 Rs. At times I'd sleep on the platform, but never told her and when Mom fell sick, she didn't tell me; we both tried to protect each other. And after I started doing films, Mom kept me grounded, 'No matter how high you fly, always be humble'," he said and added: "After Papa's death, we became close - she'd lost her partner and I, my best friend. On his choutha, I said, 'Instead of mourning, let's celebrate his life'. We wore colourful clothes and invited a rock band. We narrated our fond memories with Papa; Mom said, 'I didn't know I was married to such a wonderful man'."

Soon, Anupam Kher's mother started accompanying him to award shows and other events. Once, the actor uploaded a video of her without her knowledge, and in no time, she became a hit among his fans.

"After, we became best friends - she'd accompany me to award ceremonies and chat with my friends. Once, while she was saying something, I filmed her without her knowledge & posted it online - it went viral! So, I started uploading her videos regularly. She didn't know she was being filmed, so she'd talk about everything under the sun-be it her bahu ki burai or her hair fall problem. Soon, she became so popular that random people would ask - 'How is #dularirocks?' And Mom didn't know about it until people started recognising her on the streets-they'd ask for selfies! She wasn't used to so much attention, so she confronted me, 'Kya karta rehta hai tu?' Now she's become more vigilant, so I've started filming her sneakily. But whenever she sees me, the first thing she asks is, 'Aaj camera kaha chupake rakha hai?'" said Anupam Kher.

Anupam Kher is best-known for his performances in films such as Saaransh, Ram Lakhan, Lamhe, Khel, Darr, Dilwale Dulhaniya Le Jayenge, Maine Gandhi Ko Nahin Mara and Special 26, to name a few. His last Hindi project was 2019 crime-thriller One Day: Justice Delivered in which he co-starred with Esha Gupta, Kumud Mishra and Anusmriti Sarkar.