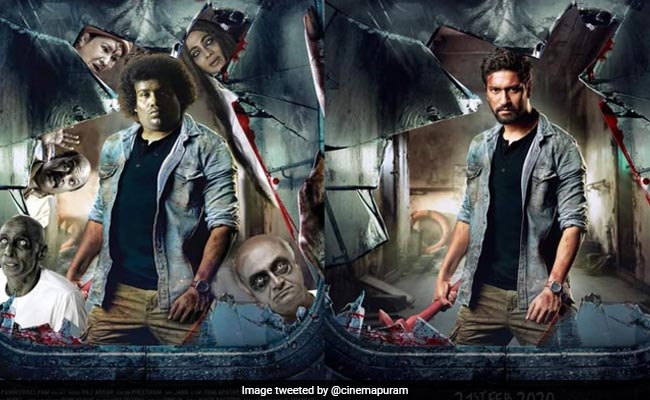 Yogi Babu in Pei Mama and Vicky in Bhoot.(courtesy cinemapuram)

See some of the tweets here:

This is the OFFICIAL POSTER of #YogiBabu's #PeiMama which is not copied, nor inspired but they directly used #Bhoot poster pic.twitter.com/OYQjtxeYiZ

This is the OFFICIAL POSTER of #YogiBabu's #PeiMama which is not copied, nor inspired but they directly used #Bhoot poster by using face swapping technique.. pic.twitter.com/PAkajS7vvQ

Bhoot: Part One - The Haunted Ship, other than Vicky Kaushal, also starred Bhumi Pednekar and Ashutosh Rana in pivotal roles. The film was the first of its series directed by Bhanu Pratap Singh and produced by Karan Johar's Dharma Productions.

The film opened to largely poor reviews from film critics. In his review for NDTV, Saibal Chatterjee gave 1.5 stars (out of 5) to Bhoot: Part One and wrote: "You know a horror film is a horrific misfire when it resorts to every trick in the book to scare the living daylights out of you but fails to well and truly pin you down. There is no want of trying in Bhoot: Part One - The Haunted Ship, written and directed by Bhanu Pratap Singh. The film abounds in tame and cliched genre tics that eventually amount to little."