"Exploring Maharashtra in the Monsoons," she captioned the post 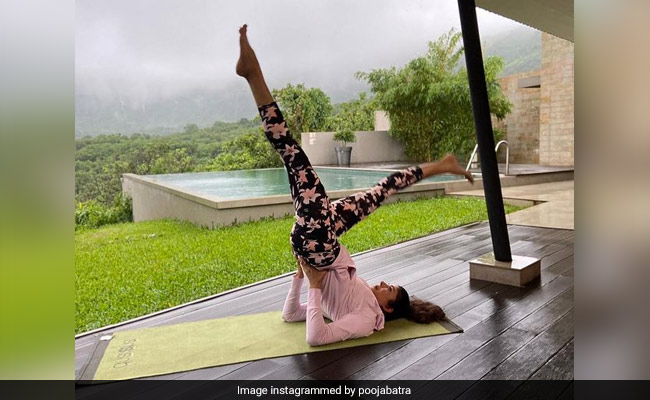 Actress Pooja Batra brightened up her Instafam's feed by sharing a set of pictures from her yoga diaries. No matter where she goes, yoga is always a part of Pooja Batra's routine. The actress, who is currently in Shillim, Maharashtra, shared a set of pictures and videos on her profile, in which she can be seen trying out different asanas with utmost ease. She captioned the post: "Let's get it on." She accompanied her post with the hashtags #yogini, #naturelover and #yogaretreat." She added in her caption, "Exploring Maharashtra in the Monsoons."

Pooja Batra, who swears by yoga, often shares inspirational posts pertaining to fitness on her Instagram profile. Take a look at some of the posts shared by the actress here:

After her Miss India win, Pooja Batra delayed her plans of joining Bollywood to finish her education. In 1997, she made a full-fledged debut in Vishwavidhaata but she shot to fame with her role in Virasat, also starring Anil Kapoor, Tabu and Amrish Puri. Pooja Batra's filmography also includes movies such as Kahin Pyaar Na Ho Jaaye, Dil Ne Phir Yaad Kiya, Nayak and Haseena Maan Jayegi.

In 2019, Pooja Batra got married to long-time boyfriend Nawab Shah, away from the media glare and released pictures later. They hosted a private wedding ceremony in Delhi, in July 2019. Nawab Shah has featured in Dabangg 3, Musafir, Lakshya, Don 2, Bhaag Milkha Bhaag and Dilwale.