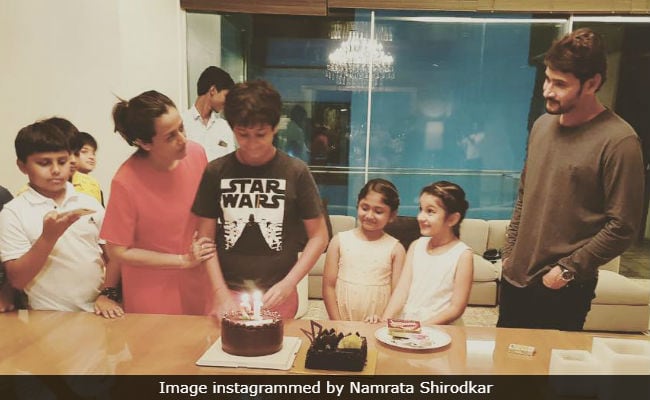 Mahesh Babu is usually absent from pictures of family events shared by his wife Namrata Shirodkar on social media. However, the Bharat Ane Nenu actor made an exception for his son Gautham's birthday party held over the weekend. On Tuesday, Namrata Shirodkar shared two pictures (with the hashtag #momentsofmine) of Mahesh Babu with his kids and one was from their son's party. In the picture from Gautham's party, Mahesh Babu stood by his son's side as he cut his birthday cake along with other family members. Check out Namrata Shirodkar's Instagram post here:

In another picture shared by Namrata, Mahesh Babu can be seen seated on a sofa as his daughter Sitara leaned on to give him a kiss:

However, it appears that Mahesh Babu skipped the party Gautham hosted for his friends:

Happy 12 birthday bash gautam's gang and a cake !! I'm assuming next year he won't wanna cut one with his mum

On Gautham's birthday, both Namrata and Mahesh Babu shared posts for their son. Mahesh Babu shared a picture of himself and Gautham, which showed that the 12-year-old is interested in filmmaking. "Time flies... My son turns 12. Wishing my most loved the happiest birthday ever. Endless love and blessings... Even happier to see him grow into a fine young man. Gautam Ghattamaneni - His proud father," Mahesh Babu captioned the post.

Time flies... My son turns 12 Wishing my most loved the happiest birthday ever Endless love & blessings... Even happier to see him grow into a fine young man @gautamghattamaneni - His proud father

Namrata, who doubled as Sitara's messenger, posted this:

Love love and more as I see you grow each year my Little boy is 12 today .. I wish you a a very happy birthday And many more to come !! I wish u achieve all that u ever wish for and more may u be the happiest soul and kind and giving as u have always been .. stay our little "jibil "always I love you forever Sitara wishes u too n says she loves u more than anything in her world

Mahesh Babu and Namrata Shirodkar co-starred in 2000 film Vamsi and they fell in love while filming. Mahesh Babu married Namrata in 2005 after which she quit films. Namrata, a former Miss India, has starred in films like Hero Hindustani, Astitva, Pukar andBride and Prejudice.