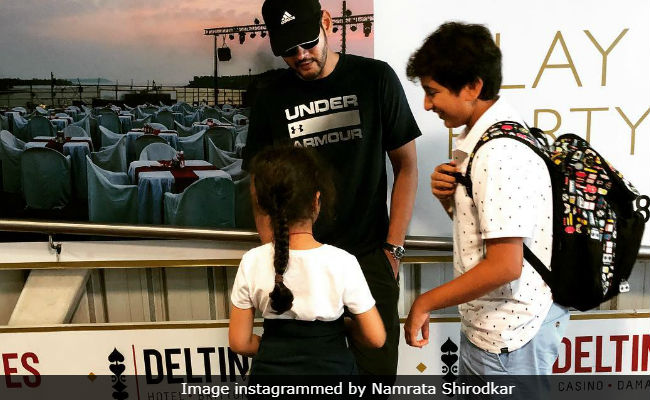 Namrata Shirodkar latest Instagram post is kinda Kahaani Ghar Ghar Kii. When mom says 'no' kids turn to their dad to negotiate. On Wednesday, Namrata Shirodkar shared a picture of her six-year-old daughter Sitara and 11-year-old son Gautham Ghattamaneni engaged in a conversation with their father Mahesh Babu and captioned it: "Striking deals with the dad!! As mom said, 'NO'." Mahesh Babu and family it appears were at the Delhi airport en route an undisclosed location when the deal took place. Namrata Shirodkar also didn't update if her kids were successful in 'striking the deal' with their dad.

Striking deals with the dad !! As mom said NO

Mahesh Babu and Namrata Shirodkar took their kids to Paris for vacation in June after the release of Bharat Ane Nenu, which fared well at the box office. Mahesh Babu recently launched his new project Maharshi co-starring Pooja Hegde. Maharshi will be directed by Vamshi Paidipally. The actor also celebrated his birthday (August 9) with his family in Goa.

Sitara along with her friend Aadya unveiled the logo of Mahesh Babu's film earlier this month:

And here's the first poster of Maharshi:

#Repost @urstrulymahesh Embarking on my new journey as RISHI. #MAHARSHI