Yami was shooting for her upcoming film Dasvi opposite Abhishek Bachchan 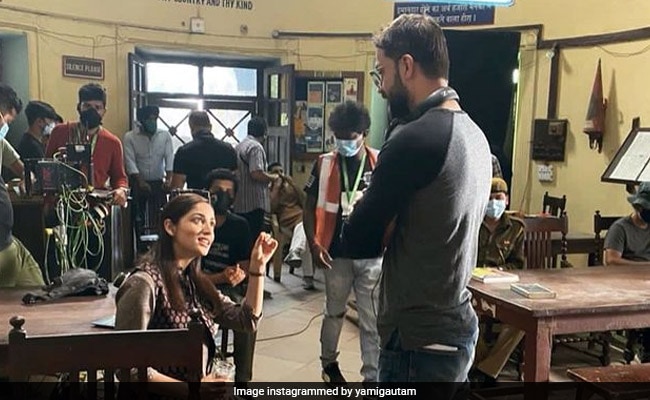 Yami Gautam will next be seen in Dasvi. (Image courtesy: yamigautam)

Yami Gautam can't keep calm after managing to finish a film project amid the pandemic. The actress shared a happy dance video to express her excitement. Yami was shooting for Dasvi opposite Abhishek Bachchan. It also features Nimrat Kaur in a crucial role. Coming back to the video, it opens with Yami who is seen jumping around after completing the Tushar Jalota directorial. In the caption, she wrote, "Annnnnd it's a wrap on 'Dasvi' for me ! Saying goodbyes on certain film sets are difficult because of the amazing & memorable teamwork you've had ! Thank you so much #TeamDASVI for this unforgettable experience & getting #JyotiDeswal really close to my heart."

Yami posted another clip with Abhishek, where the team celebrate the moment by cutting a cake. See her post here:

Abhishek will portray the character of Ganga Ram Chaudhary.

Yami's role in Dasvi is that of a police officer.

Speaking about her prep work for the role, Yami had said, "This is the first time that I will be playing a Haryanvi character on screen. It is a completely different challenge for me." The actress revealed that she had to undergo the workshops to fine-tune her language, diction and body language for this character.

Apart from this film, Yami is preparing for a thriller titled A Thursday. She will be seen as Naina Jaiswal, a school teacher. Nehe Dhupia, Atul Kulkarni, Dimple Kapadia and Maya Sarao are also a part of the film.

Breaking News: A series of unforgettable events are about to come your way, all that happened on #AThursday! #FridaysWithRSVP@YamiGautam@NehaDhupia#DimpleKapadia@atul_kulkarni#MayaSarao@behzu@RonnieScrewvala@prem_rajgo@bluemonkey_film#AshleyLobopic.twitter.com/hOTNDw5WEj

She also has horror-comedy Bhoot Police, along with Saif Ali Khan, Arjun Kapoor and Jacqueline Fernandez. It will be released on September 10.