"Two under two and three kids in four years has been truly humbling," wrote Lisa Haydon 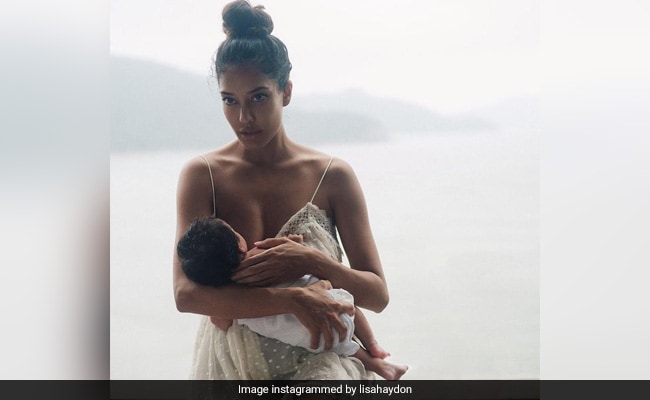 World, meet Lisa Haydon's baby daughter Lara. The actress introduced her Instafam to her baby girl with stunning pictures of themselves on Instagram on Sunday. Lisa Haydon and her husband Dino Lalvani welcomed their third child in June. Lisa married entrepreneur Dino Lalvani in 2016 and the couple became parents to their first child Zack in the year 2017 and son Leo in February last year. In her first Instagram post, Lisa Haydon can be seen sporting a black outfit and holding her baby daughter in her arms with a breathtaking view in the background. She wrote that she had been "away from Instagram" for a while because "things felt pretty extra" after having a third baby.

"So, I've been away from Insta for a while now, here's my best attempt at a catch up post. Things can feel pretty extra after having a baby. A lot of it is probably hormones. Two under two and three kids in four years has been truly humbling. I don't mean humbling in the way I've heard ppl say after winning an Oscar, LOL. But humbled in an, I feel incapable kind of way. I thought we'd be taking it one day at a time, but we're down to taking it one feed at a time. No one tells you how long you'll spend burping your baby. And what not getting that burp up can mean," she wrote in her post and added: "I take a second sometimes to just remind myself there is no destination in motherhood. Pumping while having a coffee, organising the boys' schedules - pick ups, drop offs and bouncing the bouncer with one foot. And then there's that sound, that tiny little noise that makes it all worth it, and when you finally hear it, it's the most rewarding... that little burp!"

In a separate post, Lisa Haydon posted a couple of pictures of herself breastfeeding baby Lara and wrote: "Was it just world breastfeeding week? In honour of this special week Lara would like to thank everyone that has given her a seat at the table." Lisa looks gorgeous in a white outfit in the photos.

In June, Lisa Haydon treated her fans to stunning pictures of herself from her baby shower. In case you haven't seen them yet, take a look now:

Meanwhile, check out some photos from Lisa Haydon's maternity diaries that we have selected for you:

Lisa Haydon has worked in films like Aisha, Rascals and the 2014 film Queen, which marked her second film with Kangana Ranaut. She is best-known for her performance in the 2014 film The Shaukeens and the 2016 film Housefull 3. She was last seen in Ae Dil Hai Mushkil. Lisa Haydon has also been part of reality TV show India's Next Top Model and web-series The Trip.