Why Salman Launched Athiya Shetty and Sooraj Pancholi in Hero 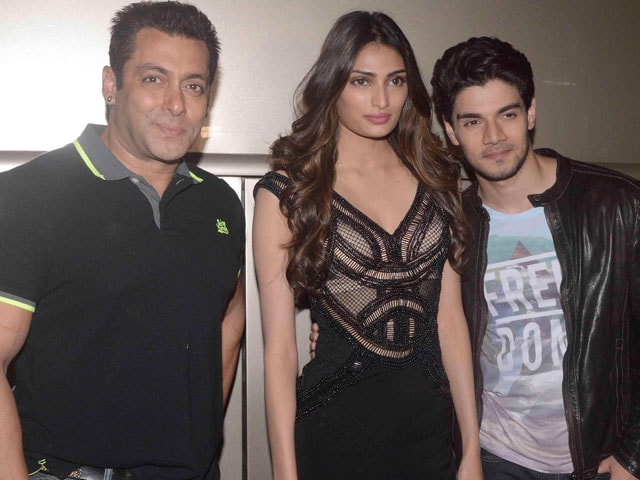 Salman, Ahiya and Sooraj photoghraphed at an event in Mumbai.

Gurgaon: Superstar Salman Khan said that he is not launching Suniel Shetty's daughter Athiya and Aditya Pancholi's son Sooraj with his forthcoming production venture Hero because they are "star kids", but due to their talent and passion for acting.

"People are saying that we have launched them Athiya and Sooraj because they are star kids. But it is not like that. I have many friends, who have children, but I have not launched them. And a lot of parents come and ask me to launch their children," he said. (Also Read: Shah Rukh Khan to Suraj, Athiya: Sure You Will Make Your Dads Proud)

"So, we are not launching them because they are Aditya and Suniel's kids. I have seen Athiya and Sooraj's work and they are brilliant and good at what they do. They are very sorted," Salman said during a promotional visit to the Millennium City with the lead pair on September 5.

The 49-year-old actor, who is going all out to promote the film, went on to mention: "If you see the film's trailer or see them talking during an interview, you feel that they mean what they are saying".

Taking a dig at himself, Salman quipped: "They are sensible unlike their producer, who at time goes off."

However, it was not a cakewalk for Athiya and Sooraj to grab their debut film as Salman said that, scoring roles in the movie "Halwa nahi tha".

"They had to go through several tests and auditions from action to dancing to acting. After all that they were finalised," said the Kick star.

The close bond shared between the three was quite evident at the press conference as the trio joked and shared their experience of working together. Salman introduced them to the media as "Athiya ma'am" and "Sooraj baba".

The debut actors have often expressed their gratitude towards Salman for guiding them. Salman also hopes that the newcomers make a strong foothold in the industry.

"I think both of them should do really well and grow bigger and get better with each film and every year," said Salman, who looked casual in a black T-shirt and jeans.

Directed by Nikhil Advani, Hero is a remake of Subhash Ghai's 1983 film of the same name and will hit the screens on September 11.

Salman also shared trivia related to the film, by saying that he had suggested Mr Ghai to remake Hero with him as lead when the director had gone to the actor to narrate Yuvvraaj.

"Subhash came to me with a film and narrated it to me. I said 'Sir, don't do this movie with me, but let's do Hero, which he had made a long time ago. I even suggested some changes and said 'We can make a modern movie'. He said 'no' and we did Yuvvraaj."

"But after sometime, I saw Sooraj. He was working with me on Ek Tha Tiger and I thought I should cast him before Aditya Chopra sees him," Salman said, adding: "I thought that Hero was good enough for me to do and Hero is good enough for Sooraj baba to do".