Priyanka Chopra said that 'it's not (Georgina's) fault' and that wearing the dress was 'the right choice.' 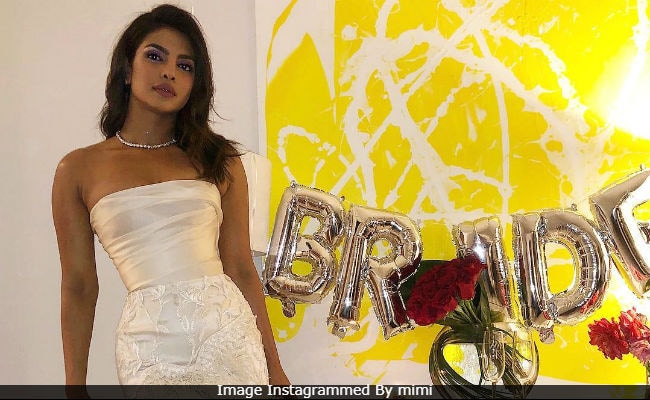 Not since Scarlett Johansson at the Met Gala this year has the word 'Marchesa' made such headlines. Actress Priyanka Chopra recently wore a white Marchesa dress to her bridal shower and it's caused something of a stir - because Marchesa is co-owned by Georgina Chapman, estranged wife of disgraced Hollywood moghul Harvey Weinstein. Stars rushed to distance themselves from Marchesa, once a red carpet favourite, after Mr Weinstein was accused of sexual misconduct by over 60 women last year, including A-list actresses such as Angelina Jolie and Gwyneth Paltrow. After the scandal, Scarlett Johansson was the first celebrity to wear one of Marchesa's trademark romantic, floaty pieces at the Met Gala some months ago - and now Priyanka, who told Women's Wear Daily that 'it's not (Georgina's) fault' and that wearing the dress was 'the right choice.'

Priyanka Chopra, who is to marry singer Nick Jonas in a month or so, picked a white strapless dress with a feathered skirt - very typically Marchesa - for the bridal shower that her friend Mubina Rattonsey and agent Anjula Acharia hosted for her a couple of days ago at the Tiffany's store in New York. Speaking to Women's Wear Daily, Priyanka defended her decision to wear the controversial brand, saying, "Georgina's a friend of mine, and she has been. And it's not her fault. And I don't think it's right to take it out on a self-made woman what somebody in her life did. That's the wrong attitude. I've known her for years, and that was a beautiful gown, and deserved to be worn by a bride-to-be. And it made me feel like a princess. It was the right choice."

THE brighter version for everyone. @priyankachopra #styledbymimicuttrell (sorry I was too exited when I posted the first pic)

Post-Weinsteingate, Marchesa was shunned at events like the Oscars and Golden Globes - until Scarlett Johansson wore a maroon flower-festooned dress to the Met Gala. Then, nothing - even at the Emmys in September, which some fashion pundits expected to have served as a comeback for Marchesa. Except that not a single celebrity wore a Marchesa dress. In June, three months before the Emmys, The Daily Beast revealed that Marchesa, which Georgina Chapman insisted had nothing to with Harvey Weinstein, had business appeared to have business connections with another company, called SeaMarch (and anagram of Marchesa) Creations which was linked to Mr Weinstein, who has long been accused of using his influence to get celebrities to wear his then-wife's designs on red carpets.

"I wore Marchesa because their clothes make women feel confident and beautiful and it is my pleasure to support a brand created by two incredibly talented and important female designers," Scarlett Johansson told E! News after the Met Gala. And now, Priyanka Chopra also appears prepared to give Ms Chapman the benefit of doubt.

Speaking about the bridal shower, Priyanka told Women's Wear Daily, "It was amazing. My friends threw a really special party for me. And it's amazing that it was at Tiffany, because I'm a fan of the brand, and it was really special in my relationship." Nick, who apparently proposed to Priyanka on her birthday in July, is believed to have picked up her ring from Tiffany.

"But it wasn't a normal shower. I haven't even opened gifts yet, it was just dancing and cocktails and fun," she added.

Priyanka Chopra's bridal shower was attended by Oscar-winning actress Lupita Nyong'o, her mother-in-law-to-be Denise Jonas and future sister-in-law Danielle (wife of Kevin Jonas) were also on the guest list, which also included Neetu Kapoor and Sonali Bendre, both of whom are in New York for medical reasons.

Priyanka Chopra and Nick Jonas had a traditional roka ceremony in Mumbai this year. Rumour has it that a wedding is being planned this December in Jodhpur.