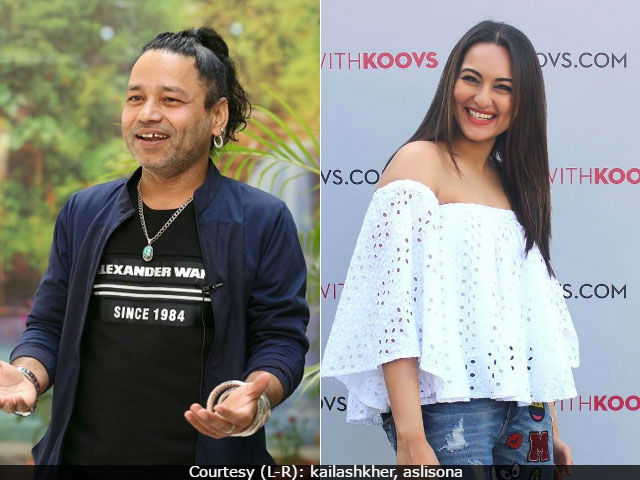 New Delhi: As India is prepping to host Justin Bieber in May for his first concert in Mumbai, singer Kailash Kher said that actress Sonakshi Sinha should 'not be a part' of the gig, as it sends a 'wrong message internationally,' reports news agency IANS. "I read somewhere that Canadian singer Justin Bieber is coming to India, and Sonakshi will perform at the gig. The news was cute, but quite a lie. It doesn't give a good message internationally," Mr Kher told IANS. Justin Bieber is coming to India as part of his Purpose World Tour. Apart from Sonakshi, Jacqueline Fernandez and Elarica Johnson (Harry Potter And The Half-Blood Prince actress), are expected to be a part of the concert.

Kailash Kher, 43 is against Bollywood actors being part of music concerts and feels that people give 'more value' to actors instead of singers in India. He told IANS that a known Bollywood face has become a trend. "They (people from foreign shores) will think that Sonakshi must be a big singer in India. And then she will get concert offers from Canada, and then probably Sonakshi will laugh them off saying 'I am not a singer but an actor'," Kailash Kher told IANS.

Meanwhile, singer Armaan Malik seconded Mr Kher's opinion and tweeted, "Agree with Kailash Kher sir. Actors are actors & singers are singers. Leave the stage & mic to us, that's our playground not yours." However, Armaan's statement didn't go well with Sonakshi, who later replied to his tweet and said, "A secure artist would always encourage another artist to grow their skills and follow their dreams. Art in any form should not be suppressed."

"Live performances are thought to be more valuable around the world, not actors, but not in India. Indians are very emotional and that is why sometimes they miss out on logic while watching a live gig. The organisers don't consider crowd's sensibilities (while deciding on the acts in a live gig), and only go for a popular face. Often actors just come and say 'It is nice to be here'," says the Padma Shri award-winning singer-composer, adding that event managers and producers of entertainment industry are 'scared' to take singer on board.

Of the gig, Sonakshi, 29, earlier told IANS, "I am really fond of Justin Bieber's music and I love how his sound has evolved over the years and today he reaches out to a universal fan base. I'm definitely looking forward to this event."

Kailash Kher is known for his hit songs like Ya Rabba, Allah Ke Bande, Chak De Phatte, Tere Naal Ishqa and Teri Deewani. He has provided playback for a song in Baahubali: The Beginning.

Promoted
Listen to the latest songs, only on JioSaavn.com
Justin Beiber will perform at Mumbai' DY Patil Stadium on May 10. Apart from India, the singer will perform in Israel and Dubai.

Sonakshi Sinha Argues With Singer Armaan Malik Over Her Bieber Gig, Mistakes Him For Brother