Why Ekta Kapoor Doesn't Share Pics Of Her Son Ravie

Ekta Kapoor, who celebrated her 44th birthday on Friday, became a single parent in January this year 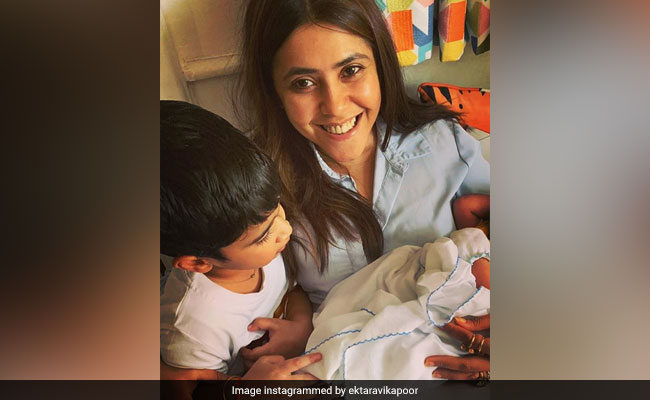 TV czarina Ekta Kapoor, who welcomed son Ravie via surrogacy earlier this year, avoids sharing photos of the little one on social media and Tusshar Kapoor spilled the beans on why exactly in an interview with Hindustan Times. Needless to highlight that photographs of star-kids always go viral and that's something the Kapoors aren't comfortable with just yet, Tusshar told the publication: "It is a conscious decision to keep baby Ravie's picture under wraps; he is too small right now. We are a little conservative when it comes to flashing baby's picture in the media." However, he also added that they plan to release photos of Ekta's son only when he turns one: "it would be more appropriate to share his pictures in public once Ravie turns a year old or above."

Mother's Day is everyday therefore this post for my boss partner n mother @shobha9168 ! Ppl were in shock when we started..... why my company had my moms name as a producer instead of my more famous dad but my dad insisted that since we both r working we should use our names! Years later here we r !ours is probably the first mother daughter start up (in media)hopefully many more will b there in future

Elaborating on his point, Tusshar Kapoor said it's too "early" as Ravie is just a few months old: "We just don't feel comfortable exposing him to the world this early because once the pictures are out, it becomes viral and grabs a lot of eyeballs and comments." Single parent Tusshar Kapoor's son Laksshya was also born via surrogacy in 2016, who often features in adorable posts on Tusshar and Ekta's Instagram.

Ekta Kapoor, who celebrated her 44th birthday on Friday, became a single parent in January this year, when she announced that the Kapoor family has swelled by one with a heart-warming post. "I cannot even begin to express how happy my baby's birth has made me. Everything in life doesn't go the way you want it to but there are always solutions to those hiccups. I found mine and today, I feel immensely blessed to become a parent," she wrote.

Since then, Ekta's Instafam have been treated to only glimpses of her baby boy.

First Mother's Day as a mother naaaaah that was three years ago! #motheroftwo

Ekta Kapoor also recently introduced a creche in her office premises, saying that she regrets not doing it earlier. Ekta Kapoor, who is best known for making some of Indian television's biggest shows, is busy with ALTBalaji's upcoming show Mentalhood, starring Karisma Kapoor. The revamped version of her TV soap Kasautii Zindagii Kay is ruling the small screen now.