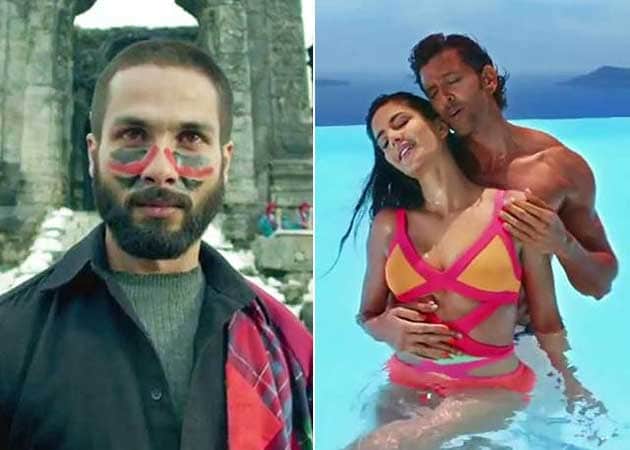 Stills from Haider and Bang Bang

One of the biggest weekends of the year, starting October 2, will see the release of two films - Hrithik Roshan's Bang Bang and Shahid Kapoor's Haider, which are as different as chalk and cheese in terms of theme, budget, cast, and sensibilities. Hence, trade experts opine that it's "unfair" to compare the two.

"It's not a clash of the titans at all," trade analyst Komal Nahta told IANS. "It is unfair to compare them." Cinematically speaking, it's true!

Not only the tone and tenor of the two films are diverse, their directors are poles apart in their sensibilities and approach while narrating a story. (Also Read: Hrithik, Katrina's Bang Bang Theory)

In comparison to director Sidharth Anand's massy entertainers like Salaam Namaste and Bachna Ae Haseeno, Vishal Bhardwaj, known for his penchant for literature, especially his fascination for Shakespeare's classics, has scored big for convincingly adapting Macbeth as Maqbool, Othello as Omkara and now he has adapted Hamlet as Haider.

Vishal too feels that the two films are put in the same bracket only because they are releasing on the same day, otherwise there is not a single common factor between them.

"Bang Bang is said to be a Rs 180 crore film, ours is a Rs 24 crore film. Of course, they would need more money to break even, we would need lesser," Vishal told IANS.

"It's a very big weekend and it can accommodate two films and that's why we thought of releasing with Bang Bang," he added.

Shot in Abu Dhabi and India, fast-paced Bang Bang, which has elements like car chase and shoot-outs, promises edge of the seat excitement, while Haider, set in the 1990s of Kashmir, is grim and gritty as it focuses on the human tragedy in the region.

When it comes to the lead actors of the two films, Hrithik's and Shahid's standing is also different in Bollywood boulevard.

If Bhardwaj has roped in Irrfan Khan and Tabu, to make the drama more intense, Anand relies on the likes of Danny Denzongpa and Javed Jaffrey to add entertaining elements.

Bollywood's reigning queen Katrina Kaif is the female lead in Bang Bang and rising star Shraddha Kapoor will be seen with Shahid in Haider.

Set for the Thursday release, films with diverse themes will give a healthy choice to the viewers to the make the best of their holiday.