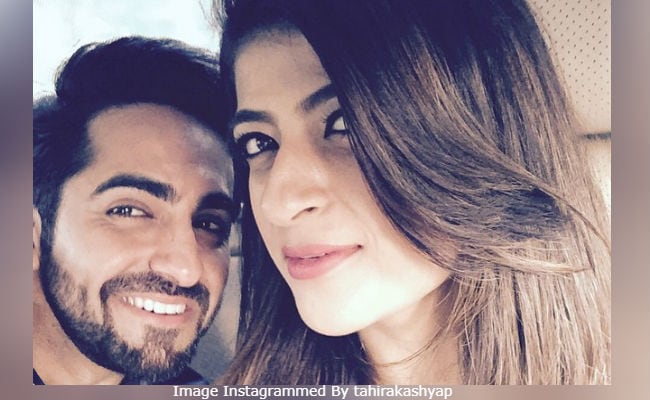 Ayushmann Khurrana's wife Tahira Kashyap found a spot on Thursday's trends list after the actor announced on social media that she will soon make her debut as a feature film director. Tahira has earlier directed a short film titled Toffee. "From writing books, plays and directing theatre productions to making a feature film now. So proud of you, Tahira Kashyap. The first step towards your dream. You have written a wonderful script and you are backed by the most credible people," Ayushmann Instagrammed on Wednesday, with her pictures. Details about the film, to be co-produced by T-Series and Ellipsis Entertainment, haven't been revealed as of yet.

From writing books, plays and directing theatre productions to making a feature film now. So proud of you @tahirakashyap. The first step towards your dream. You have written a wonderful script and you are backed by the most credible people. @ellipsisentertainment @tseries @atulkasbekar @tanuj.garg

Dreams do come true! Might not look it, but it took time for my script to find the perfect platform and for people to have faith in my vision as a director. And I wouldn't have it any other way as I get to work with the amazing @atulkasbekar @tanuj.garg @tseries.official @findingshanti Big, big thank you for backing me on this one!special thanks to my soul sister @reliablerani ................. Repost from @tseries.official @TopRankRepost #TopRankRepost Our untitled 3rd collaboration with @ellipsisentertainment after #TumhariSulu & #CheatIndia to be directed by the brilliant, @tahirakashyap The film, a warm slice-of-life drama set in Mumbai, will go on floors next year. Casting begins shortly. @itsbhushankumar @tanuj.garg @atulkasbekar55

Ayushmann Khurrana and Tahira Kashyap married in 2011. The couple are parents to children Virajveer and Varushka. His brother Aparshakti is also an actor and made his debut with Aamir Khan's blockbuster film Dangal.

Ayushmann, a popular VJ-turned-TV presenter, debuted in the industry with 2012's Vicky Donor. He later followed it up with films like Nautanki Saala, Bewakoofiyaan and Dum Laga Ke Haisha, which won a National Film Award.

Ayushmann Khurrana is also a singer and has sung several songs, including Paani Da and Yahin Hoon Main.