"Whoever Said That Maternity Fashion Isn't A Thing," Kareena Kapoor Proves You Wrong With One Pic

"In case you couldn't tell... 'olive-d' this dress a lil' too much while expecting," wrote Kareena Kapoor 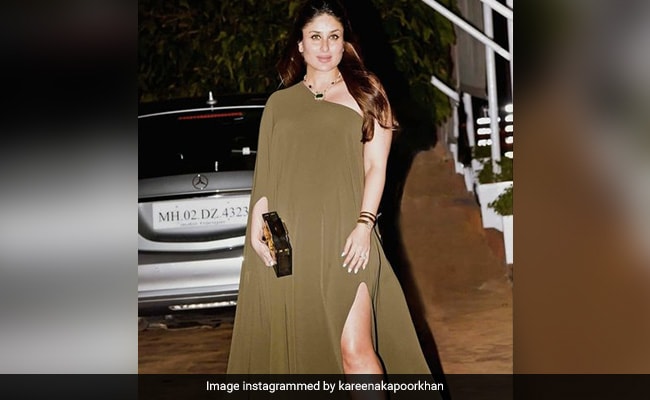 Whoever needs to hear this - maternity fashion in a legit thing and we have Kareena Kapoor's  vote. The actress, who is a mother of two, shared a throwback post from her pregnancy diaries and we love it. The actress can be seen dressed to perfection in a single-sleeve olive outfit with a thigh-high slit. Let's also take a moment to read the thing Kareena Kapoor wanted to establish with her post and she rightfully did. Her caption read: "Whoever said that maternity fashion isn't a thing... was kinda wrong. And in case you couldn't tell... 'olive-d' this dress a lil' too much while expecting. I've captured this and more of my pregnancy journey in my book. #ThrowbackThursday."

Kareena Kapoor is all set to launch The Kareena Kapoor Khan Pregnancy Bible soon. Kareena Kapoor and Saif Ali Khan welcomed a son on February 21. "We have been blessed with a baby boy. Mom and baby are safe and healthy. Thank you to our well-wishers for their love and support," Saif said in a statement. Earlier this month, Kareena's father and veteran actor Randhir Kapoor confirmed that his grandson has been named Jeh and told news agency PTI, "Yes, Kareena and Saif's son has been named Jeh recently."

Kareena and Saif Ali Khan married in 2012 after dating for some years. They announced their second pregnancy last August. They are co-stars of films like Omkara, Agent Vinod and Kurbaan and Tashan. The actress will next be seen in Laal Singh Chaddha, co-starring Aamir Khan.