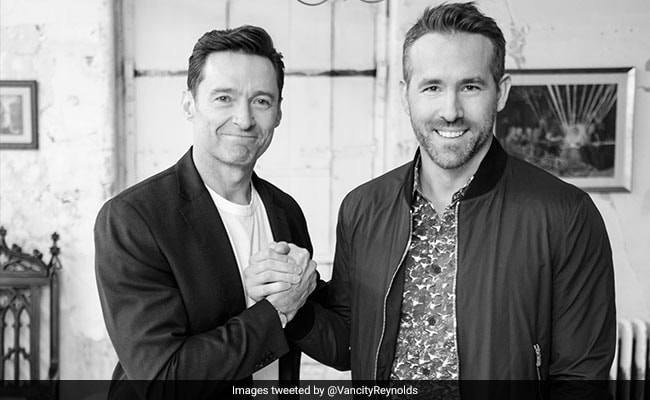 Right? Who IS Hugh Jackman?

And the thread literally exploded forthwith.

Oh Hugh Jackman..see he's the guy that COULD steal your wife but he won't because he's a good guy who has a wife of 23yrs that he adores. pic.twitter.com/2oCNN59QzI

He's the one on your right pic.twitter.com/VJOTFyOWa1

Ah, two of the "sexiest men alive" fighting each other for our entertainment. *insert popcorn GIF* @VancityReynolds@RealHughJackman#YoureOnJ! pic.twitter.com/hCIlKaO4Dj

The thread needed a killer conclusion. It came from Hugh Jackman himself:

THIS "sexiest man alive" WON that battle (I think!?) @VancityReynolds@Jeopardyhttps://t.co/OwGs605OKo

Just get a room already, guys.

Ryan Reynolds and Hugh Jackman hate each other like they love each other and we win because it means belly laughs by way of their boss posts trolling each other, often featuring actor Jake Gyllenhaal as here:

This unforgettable sweater party hoax was cited in a tweet in the thread:

These fucking assholes said it was a sweater party.

...with this ROFL result:

There's plenty more where those came from, not forgetting this insane 'interview':

It all began when Wolverine fought and bested Deadpool in 2009's X-Men Origins: Wolverine. In 2016, Deadpool finally had his revenge - a blockbuster film to himself in which he got to run his motormouth AND beat up some bad guys. Two years later, Wolverine made an appearance in the trailer for Deadpool 2. It didn't end well for either. Hugh Jackman and Ryan Reynolds have kept the fun and games going for our entertainment off-screen for five-plus years now, and we love them 3,000 for it.

What the world really needs now is a meta-troll-off: Ryan-Hugh-Jake vs Robert Downey Jr-Chris Evans-Chris Hemsworth. That sounds about right.