Where To Find Daisy Shah These Days - Pics Say It All

"To infinity and beyond," Daisy Shah captioned the post 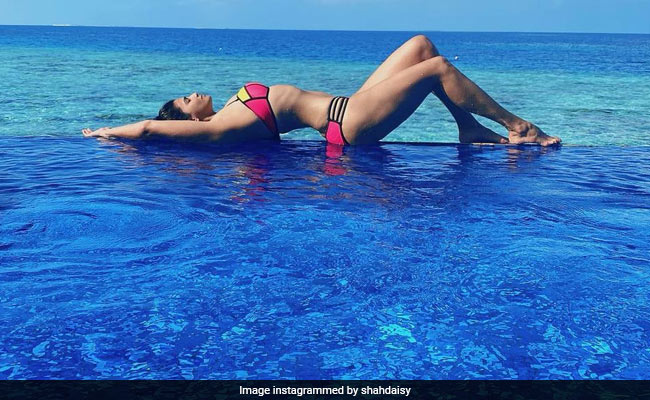 Maldives appears to be a favourite holiday destination of many Bollywood celebrities these days. From Taapsee Pannu to Kajal Aggarwal and Samantha Ruth Prabhu, Neha Dhupia, Tara Sutaria, Hina Khan, everyone seems to be a fan of the island country. Jai Ho actress Daisy Shah is the latest celebrity to check into Maldives. The actress has been actively sharing pictures from her vacation there. On Wednesday evening, she posted a set of stunning pictures, in which she can be seen wearing a pink bikini. "To infinity and beyond," she captioned one of her posts. She also posted a video and captioned it: "Meet me where the sky touches the sea."

Daisy Shah, in a happy state of mind, shared these pictures on her Instagram profile on Wednesday afternoon and she wrote: "Love it. Live it. Twirl it." ICYMI, these are the photos we are talking about

Daisy checked in to the island country a few days ago and has been delighting her Instafam with pictures day-after-day. Here are some more envy-inducing pictures from the actress' Maldives holiday. Check them out:

Daisy Shah, a former model, made her acting debut with 2011 Kannada film Bhadra. She made her big Bollywood debut with the film Jai Ho, in which she shared the screen space with Salman Khan. Some of Daisy Shah's films have been hits while some have been box office debacles. Her filmography includes Race 3, which had an ensemble cast and was headlined by Salman Khan and the thriller Hate Story 3. The actress has not announced her upcoming projects as of now.