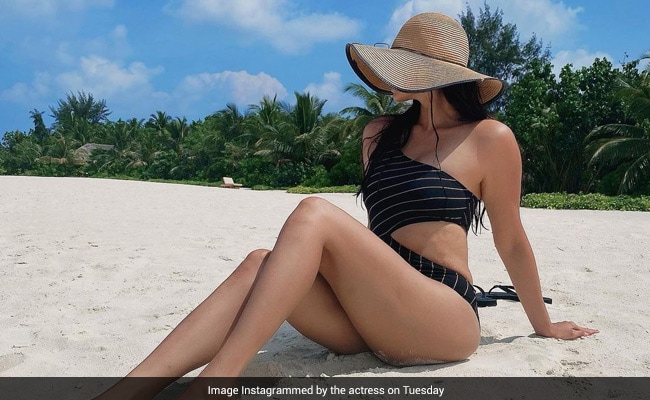 The actress flew to the Maldives earlier this week. (Image courtesy: Instagram )

Jai Ho actress Daisy Shah is having the time of her life in the Maldives currently. The actress, who "always wanted to go on a vacation," flew to the Maldives earlier this week to relax a bit. She has been updating her Instagram feed with pictures from her getaway since Monday. In her latest post, Daisy Shah posted a couple of pictures of herself sunbathing on the beach in a black monokini. She can be seen sporting a sunhat and a pair of sunglasses in the pictures. "Trust the magic," the actress captioned her post along with hashtags like #makingmomentsintime and #maldives.

In Maldives, Daisy Shah is choosing "calm over chaos." The actress earlier on Tuesday, posted another set of pictures, in which she can be seen enjoying the mesmerising beauty of the sea and sky from her resort. She looks pretty in a white outfit in the pictures. Take a look:

Daisy Shah has been following this vacation mantra in Maldives - "Relax. Soak. Unwind."

Meanwhile, check out one more photograph from the actress' holiday:

Earlier this week, Daisy Shah shared a picture of herself from a flight and wrote: "Always wanted to go on a vacay. Hum toh chale!"

In terms of work, Daisy Shah made her acting debut with 2011 Kannada film Bhadra. In Bollywood, her debut film was Jai Ho, in which she shared the screen space with Salman Khan. She has worked in a couple of Hindi films till now, including Race 3 and Hate Story 3.