"Step by step process of making a random video in a beautiful location," wrote Taapsee Pannu 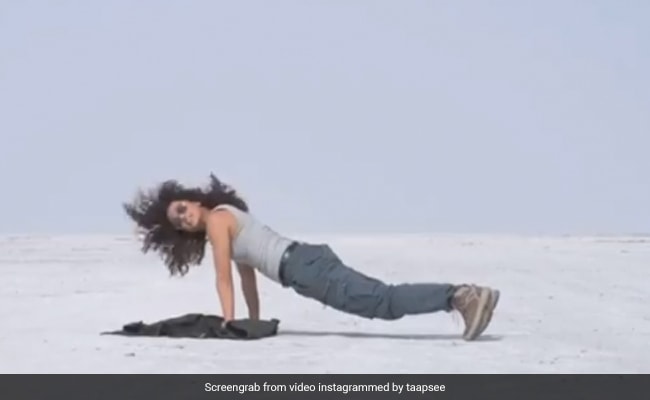 Taapsee Pannu in a still from the video. (courtesy taapsee)

Taapsee Pannu surely knows how to sneak in that extra share of fun during work. The actress, who is currently shooting for her film Rashmi Rocket in Gujarat, has actively been sharing posts from her work diaries. On Tuesday, she posted a video, in which she can be seen doing push-ups in the middle of Rann Of Kutch. Taapsee summed up the post with a rather descriptive caption that read: "Step by step process of making a random video in a beautiful location, just because you have a hidden enthu tourist in you. Figure out a random activity like push-ups. Remove the jacket because you realise it might make it look like you are touching the floor hence taking away the credit of your newly found strength."

"The actress added in her caption, "Couple of push-ups later realise that your face is not seen anyway, thanks to the baal ki dukaan on your head. Flip the head to make sure they know it's you (coz it's kinda regular to post other people's videos on your timeline). A couple of more push-ups later realise this is not going anywhere. Just get up, pick up apna boria bistar and chalte bano." Taapsee's moral of the story: "And next time find a better activity to do." She added the hashtag #RashmiRocket to her post.

Just another picture from Taapsee Pannu's day at work.

Rashmi Rocket will showcase Rashmi's journey from a tiny village to athletic contests. The film will be directed by Akarsh Khurana and it will be co-produced by Ronnie Screwvala, Neha Anand and Pranjal Khandhdiya. Rashmi Rocket is expected to release sometime in 2021.