Rashmi Rocket Review: It has its heart in the right place. If only it had kept a check on its lungs, it might have been a winner. 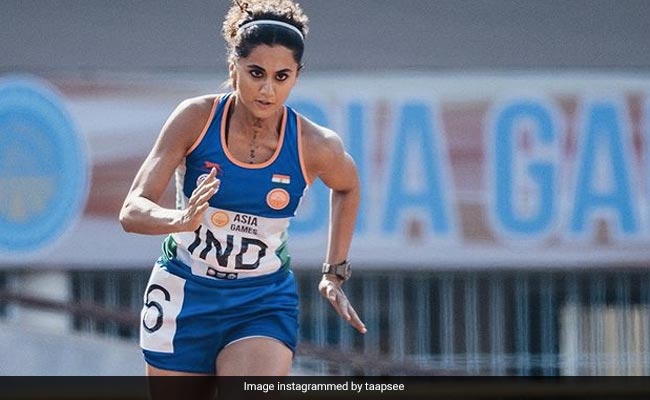 The questions that Rashmi Rocket, a social-issue sports drama, raises are absolutely valid. The methods that scenarist Aniruddha Guha and director Akarsh Khurana employ in the search for answers go a tad awry. Authenticity is jettisoned and hokey hysteria allowed a free run. Too much drama, not enough heft - that is the sum total of Rashmi Rocket.

Not that none of it works - especially impressive is the conviction that Taapsee Pannu brings to bear upon the role of a woman athlete whose gender is called into question when she begins to set the track on fire with her scorching sprint timings and scoops up a bunch of medals in an international competition.

Rashmi Rocket, streaming on Zee5, could have done much better than it eventually does given that it hits the ground running with an opening sequence in which the female protagonist is manhandled and arrested by a gruff, portly policeman in the middle of the night on an anonymously lodged complaint that she is a 'man' who has sneaked into a women's hostel.

One is instantly invested in the story of Rashmi Vira (Pannu), a preternaturally gifted runner who smashes records at will and attracts the envy of the daughter of an athletics association honcho whose reign as the fastest sprinter of the nation is ended in next to no time.

The villainy of the father-daughter duo reduces Rashmi Rocket to a conventional good-versus-evil melodrama, not the smartest race to run when you have so much real wind on your back. The story of Rashmi Rocket is a composite of the ordeals that athletes Dutee Chand and Santhi Soundarajan faced in the real world but it drifts far away from the instant tangibility of the indignities that were heaped upon those two champions.

Rashmi Rocket spins a yarn about a fleet-footed girl from Kutch nursing the after-effects of a personal tragedy - it is linked with to the 2001 R-Day Bhuj earthquake - before she is brought out of her shell by an Army man Gagan Thakur (Priyanshu Painyuli), who doubles up as a coach for the force's marathon runners.

The way in which a long-distance running coach gets involved with a sprinter is, like many of the twists that Rashmi Rocket proffers, strains credulity. A guy is in danger of stepping on a landmine in the salt desert - why the explosive device is there isn't explained - and Rashmi flies like a rocket and saves the unsuspecting man from the jaws of death. The marathon coach spots her raw speed and resorts to every trick in the book to get her back into action.

Rashmi is of course an uncut gem that requires polishing and that process begins in right earnest in an athletics training facility in Pune. Soon enough, she is outrunning everyone else out there, including the daughter of a senior federation official Dilip Chopra (Varun Badola) and once the undisputed queen of the camp.

A few in-your-face machinations later, Rashmi fails to pass a gender test. She is stripped of her dignity and the right to run. From here on, Rashmi Rocket turns into a courtroom drama in the tradition of a genre that Bollywood has a time-honoured template for. Rashmi Rocket makes no attempt to break away.

A human rights lawyer Eeshit Mehta (Abhishek Banerjee) pops up from nowhere when the media is going berserk over Rashmi's sorry fate. The advocate has an ugly spat with a television news reporter when he sees the journo mouthing disrespectful inanities about Rashmi on camera.

Everything in Rashmi Rocket, a film that is forever in reductionist mode, has to be ratcheted up into a physical confrontation just in case the audience misses what it is trying to tell us. In the case of the insensitive man with the microphone, his words and actions aren't enough to drive home the point that segments of the media never miss an opportunity to peddle sensationalism. So, the lawyer has to step in and give the raucous reporter a piece of his mind plus a few shoves and punches.

Similarly, the prickly relationship between Rashmi and her social activist-mother (Supriya Pathak) is never rendered as straightforward mother-daughter confrontation. It is used not just to establish how independent-minded our heroine is but also to talk up the older woman's willingness to let her daughter to do her own thing. Like mother, like daughter.

To cut to the chase, the altruistic Eeshit offers to represent Rashmi pro bono in a trial to prove that she is 'woman enough' to compete against other women. A gender test, he argues, does not determine the sex of an athlete, it only reveals the level of testosterone in the blood. Point well taken, gentleman. Not enough. Rashmi Rocket opts to run a cross country race with that absolutely spot-on submission instead of making a simple, targeted dash for its goal.

Yes, we are all in agreement with the advocate, but because he resorts to high drama to get his point across and is even reprimanded by the judge (Supriya Pilgaonkar) for making a spectacle of himself in the courtroom, he loses us somewhere along the way.

Regardless of the public admonishment, the advocate and the film continue down the same track until they hit the finishing tape, frothing at the mouth. By the time we get there, much stagnant water has accumulated under the bridge and it isn't something that you can't take your eyes off from.

On the acting front, Taapsee Pannu gives her role all she has. She is given a darker skin tone to show that Rashmi Vira is a girl who spends a lot of time in the sun. The actor goes beyond the superficial - the physicality she tries to impart to the character is palpable - and delivers a performance that taps the resolve and anguish of a woman wronged.

The others in the cast, Priyanshu Painyuli, Supriya Pathak and Abhishek Banerjee, throw their lot behind her. Varun Badola - an actor that we ought to see much more of - is solid.

Rashmi Rocket, to be sure, has its heart in the right place. If only it had kept a check on its lungs, it might have been a winner. Watch it for the lead performance and the blows it delivers on behalf of all female champions who have to fight much harder than their male counterparts to hold on to their place in the sun.