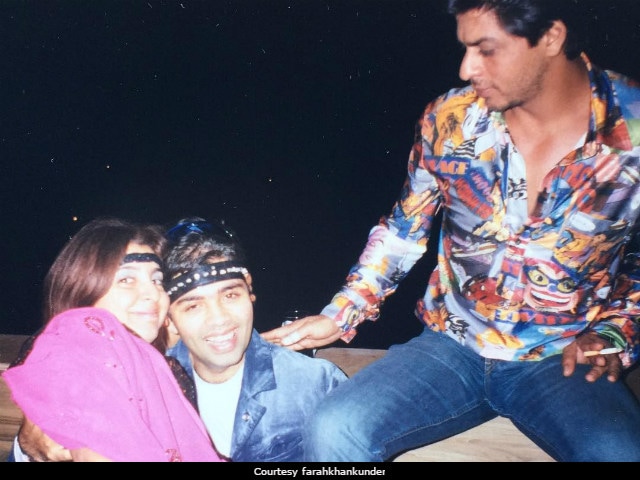 New Delhi: The Shah Rukh Khan, Karan Johar and Farah Khan combination is a deadly one. Remember Kuch Kuch Hota Hai? Shah Rukh was choreographed by Farah in Karan's debut movie as a director. Shah Rukh also starred in Main Hoon Na, which was Farah Khan's first film as a director and had a blink-and-miss appearance by the 45-year-old filmmaker. Farah made all of us nostalgic and relive those moments as she shared a throwback picture of herself along with Karan and Shah Rukh from a retro-themed party. Farah says the photo captures the moment when she and Karan managed to embarrass their superstar friend - Farah can be spotted sitting on Karan's lap in the picture. Shah Rukh is clearly the odd one out.

"Shah Rukh Khan looking rather embarrassed at my antics with Karan Johar," Farah captioned the throwback photograph, dated 2000. Old is gold, and here is proof. Shah Rukh spotted and replied to Farah's post, saying he still has the shirt from the party and it looks like a reunion is in the cards.

This is what Farah had posted:

#80sparty #blastfromthepast @iamsrk looking rather embarrassed at my antics with @karanjohar circa 2000!

Shah Rukh is embarrassed, yet again:

And u r doing it all over again! We should hav another nite like this, I still have the shirt. https://t.co/9iSV9RNBGw

The photograph is from two years after Kuch Kuch Hota Hai released in 1998, which had Shah Rukh playing a college student for one half of the film. Karan cast Kajol and Rani Mukerji opposite Shah Rukh in the college drama which enjoys the status of a blockbuster now. Farah Khan had several brief appearances throughout the film.

Promoted
Listen to the latest songs, only on JioSaavn.com
Meanwhile on May 25, Farah fished through old photos to get hold of Karan Johar's 'right profile' for wishing the filmmaker on his 45th birthday recently.

Ok done the impossible!! Found a pic with @karanjohar s right profile!! At my wedding day!! Both looking drunk tho v were not!!

Shah Rukh Khan also made a cameo in Karan Johar's last directed film Ae Dil Hai Mushkil and is currently busy shooting for Aanand L Rai's film. He will next be seen in a movie with Anushka Sharma, directed by Imtiaz Ali. Karan Johar will next be producing Ayan Mukerji's Dragon, co-starring Ranbir Kapoor and Alia Bhatt.