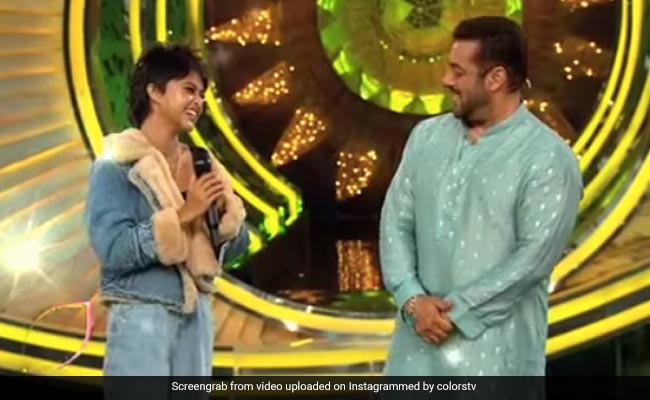 Sri Lankan singer Yohani, who became an Internet sensation after the release of her Manike Maghe Hithe cover, will appear on the Weekend Ka Vaar episode of Bigg Boss 15. The official handle of Colors TV's Instagram page shared a promo video from tonight's episode, where the 28-year-old singer can be seen singing her viral cover of the track Manike Maghe Hithe. In the video, the show's host Salman Khan too joins her and sings along. The actor is seen struggling with the pronunciation of a few words in the song, after which both Salman and Yohani burst out into a laughter.

Check out the promo video here:

Before meeting Salman Khan, Yohani had her fangirl moment with Bollywood actress and fellow Sri Lankan Jacqueline Fernandez. She shared pictures from their meeting and she wrote: "Starstruck."

On the work front, Salman Khan was last seen in the film Radhe: Your Most Wanted Bhai. The film, also starring Disha Patani, Randeep Hooda and Jackie Shroff, was Salman Khan's third project with Prabhu Deva after Wanted ( which released in 2009) and the 2019 film Dabangg 3. The actor will next be seen in Kick 2, with Jacqueline Fernandez and Tiger 3 with Katrina Kaif. Bigg Boss 15 is Salman Khan's 12th season as the host of the popular TV reality show.

About Yohani's Manike Maghe Hithe, it is a highly revered cover of a song that went viral and is everywhere (every Instagram reel, check). In an exclusive interview with NDTV last month, Yohani spoke about the kind of response the song received. She said that Priyanka Chopra sharing her song was "crazy." Yohani also said that she wishes to collaborate with Indian composers and singers.