"He strolled up to me and suggested I lose weight as he was looking forward to casting me in his movie," Sonakshi was reportedly quoted as saying 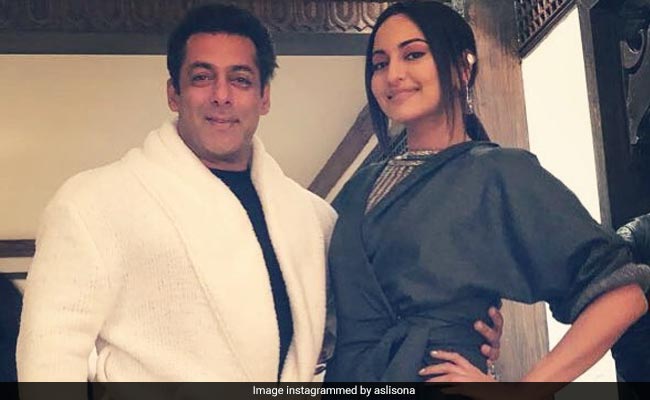 Sonakshi Sinha, who made her debut in Bollywood with Salman Khan's film Dabangg, revealed that the 53-year-old actor once asked her to lose weight as he wanted to cast her in his film, stated a report in Mumbai Mirror. Sonakshi Sinha recently made an appearance on The Kapil Sharma Show for promoting her upcoming film Khandaani Shafakhana. Speaking about how she got her first film on the show, Sonakshi said that Salman Khan directly offered her a project when she was working as an audience manager at a fashion show, where the actor was also present. "He strolled up to me and suggested I lose weight as he was looking forward to casting me in his movie," Mumbai Mirror quoted Sonakshi Sinha as saying on The Kapil Sharma Show.

Further on the show, Sonankshi Sinha revealed that Salman Khan also asked her for a treat for the "good news" but the treat is still pending. "He also asked me for a treat for the 'good news'. I had only Rs 3000 in my wallet that day and I was too embarrassed to take him out. Well, it's been almost a decade since and the treat is long overdue by all accounts," Sonakshi Sinha was quoted as saying, reported Mumbai Mirror.

Sonakshi Sinha played the role of Rajjo in the first part of Dabangg series. She has also worked in Dabangg 2. Now, the 32-year-old actress is reprising her role in the third part of the series, Dabangg 3.

Speaking about her equation with her Dabangg co-star Salman Khan, Sonakshi Sinha told news agency IANS: "It was my debut film opposite Salman Khan. My equation will never change with him no matter how many films I sign and what I achieve as an actress. He helped me to find my calling, I did not even know that I can act and I am an actress now."

The Dabangg franchise started in the year 2010. The first film released in 2010 and the second film in 2012. The third instalment of the film is slated to release in December this year. Dabangg 3 is being produced by Salman Khan and Arbaaz Khan.

On the film front, Sonakshi Sinha awaits the release of her upcoming film Khandaani Shafakhana, which will open in theatres on August 2.