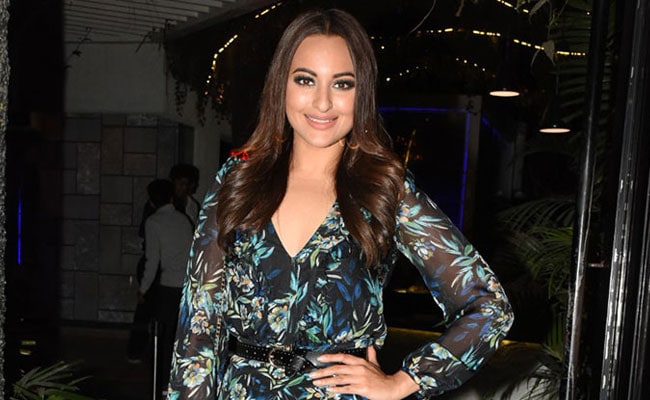 Sonakshi Sinha photographed at an event in Mumbai.

Sonakshi Sinha says working on Dabangg 3 is like homecoming for her and she hopes the cop drama franchise keeps booming. The actor, who started work on the third film led by Salman Khan last week, says she is happy that the series has gained a cult status. "It is great to be back to Dabangg series. I hope it continues to be made. It is first of its kind that came in 2010. It started a new trend in films. It is a cult film. It can be continued for a long time," Sonakshi told PTI.

Filmmaker Joe Russo, who was recently in India to promote the MCU's much-awaited superhero ensemble, Avengers: Endgame, also praised the Dabangg series for its camera work, tone and energy.

Sonakshi, 31, is reprising her role as Rajjo in the third Dabangg film and she says the character is very close to her heart as she made her acting debut with the film. "Rajjo is in my blood, I can play Rajjo in my sleep too. We have just started shooting, I joined the team for the title song.

"When a film works, the character also works. The "Thappad se darr nahin lagta..." dialogue worked a lot for me. Till today, people ask me to say it. It is great for a heroine to have a dialogue that has become iconic," she says.

There were reports Dabangg 3 would be a prequel to the two films, but Sonakshi says the new movie has both the elements of past and present. "It is prequel and present. There is a backstory to my character as well. Also, a lot of team members are the same, right from the camera crew to costume department to assistant directors, etc. Prabhudheva sir has joined us as a director and I am happy he is working on this film."

Sonakshi is currently promoting her upcoming film, Kalank, which is slated to be released on April 17. She also has films such as Mission Mangal, Bhuj: The Pride of India and an untitled project with T-Series in the pipeline.

(Except for the headline, this story has not been edited by NDTV staff and is published from a syndicated feed.)
Comments
Sonakshi Sinhadabangg 3