When Pooja Bhatt Had An "Impromptu Photoshoot" At A Petrol Pump 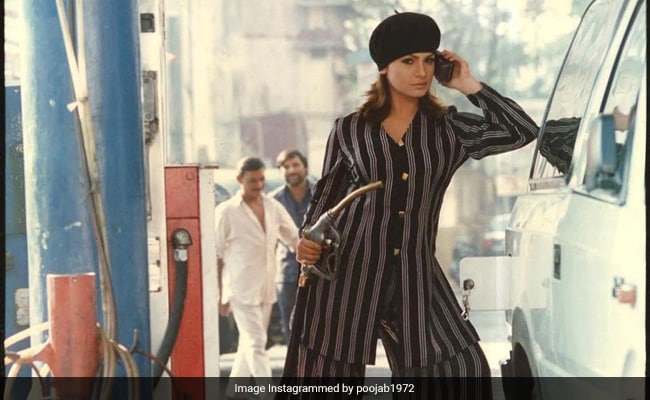 Pooja Bhatt's Instagram is a treasury of throwback photos and she keeps adding more and more gems to it. On Flashback Friday, Pooja Bhatt introduced major nostalgic vibes on Instagram as she posted a photo of herself from the Nineties. The blast from the past appears to be a photoshoot done by celebrity photographer Daboo Ratnani, who is known for assigning celebs an offbeat choice of props. And years ago, Daboo Ratnani did just that with Pooja Bhatt as well - the setting for the photoshoot was a petrol station. Pooja Bhatt can be seen posing with a petroleum hose pipe while appearing to be busy on "not a mobile phone" - she wrote in one of the hashtags.

Pooja Bhatt's throwback photo is a true blue glimpse of her Nineties fashion aesthetics - she sports striped separates styled with a black bean hat. Pooja Bhatt's Flashback Friday post came with a bunch of hashtags such as "One from the archives", "Nineties style" and "When photoshoots were impromptu."

Pooja Bhatt captioned her photo with a quote attributed to author Steve Maraboli: "If you fuel your journey on the opinions of others, you are going to run out of gas."

We found a few more throwback gems on Pooja Bhatt's Instagram: "It's raining memories," she captioned these bunch of photos from a Dabboo Ratnani photoshoot.

Last year, Pooja Bhatt shared this throwback memory with a cheeky caption on Instagram, writing: "Criticism? Doesn't faze me! I've been in hot water since the early 90's."